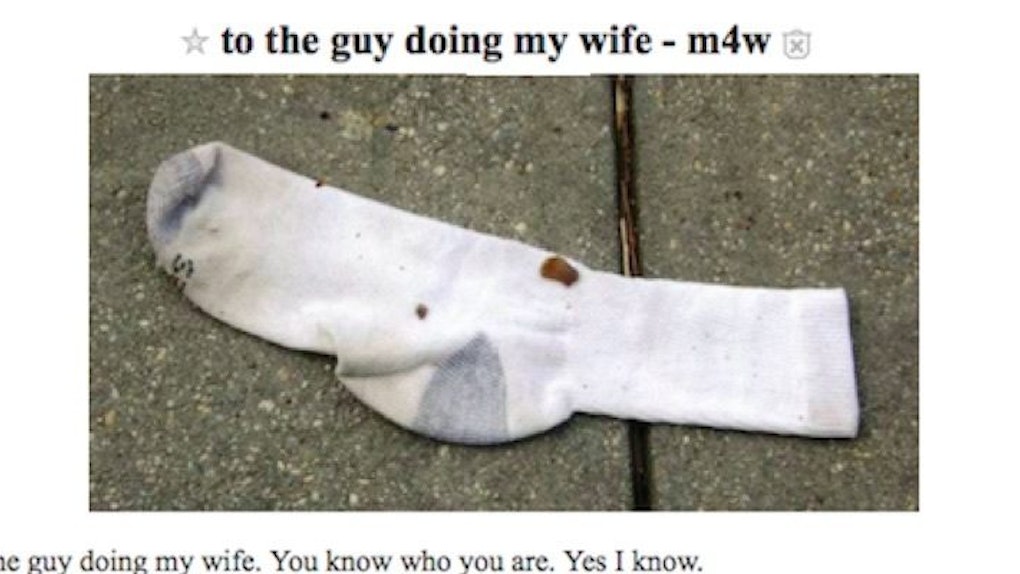 Craigslist is great for a lot of different things.

You can use this handy site to find an apartment and sell all the shit you don't want anymore.

Plus, Craigslist also serves as the perfect platform to get all your emotions out by writing an open letter to the dude who's currently boning your wife.

That's right. Rather than lashing out over the infidelity, this husband decided to post a light-hearted letter in the "missed connections" section of Craigslist that was fittingly titled "To The Guy Doing My Wife."

However, this note wasn't some sappy sob story about his broken heart.

Instead, the anonymous husband — who noted in the letter, "This was not written by anyone named Jack S." — wrote a hilarious list of requests for the man screwing his wife behind his back.

The letter starts out with a picture of a sad, lonely sock.

I'm not sure whether this soiled, abandoned sock is supposed to be a metaphor for his life or have some other hidden meaning, but nonetheless, it really sets the tone for the rest of the letter.

The husband then goes on to explain that he's not mad at the man, but simply asks that he do a few simple things since, "after all you are giving it to my wife."

He then begins his list of requests, which are all surprisingly reasonable.

The husband asks the man to stop leaving the toilet seat up and to quit stealing all of his beers when he's out fishing — or a least leave some money for replacement beers on the counter for him.

He also asks this beer-guzzling freeloader to replace the toilet paper when need be because, apparently, his son is under the impression you don't have to wipe if there's no paper, and that is a shitty situation no parent wants to deal with.

He goes on to ask the guy to stop cleaning himself off with his freshly laundered sweatshirts after banging his wife, since she doesn't do the laundry and he's not a fan of wearing crusty clothing.

In the letter, not-Jack S. tells his wife's lover to quit telling his kids he's their uncle because "they are young not mentally challenged," and asks him to keep his paws off the thermostat.

After listing a few more simple requests, he then thanks the man for taking his wife out to dinner on Valentine's Day because she wasn't that hungry when he took her out afterward and was, therefore, a cheap date.

Finally, not-Jack S. concludes the letter by not only telling the man he's going on a trip with his kids for four days in April but by also telling him where he keeps the vodka stashed in case he runs low on beer while he's gone.

Seriously, this might be the chillest man of all time.

Hopefully, this guy finds a woman who appreciates his easygoing attitude, bakes him some brownies once in a while, helps out with the laundry and, oh yeah, doesn't fuck other dudes.

Citations: Man writes hilarious list of requests to man 'doing' his wife behind his back (Metro), Craigslist