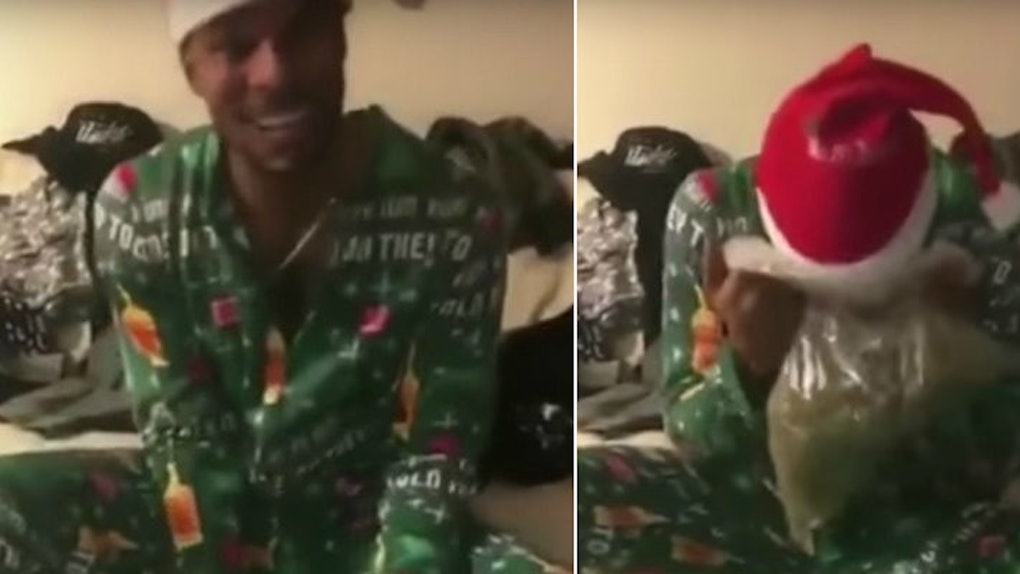 This dude must have been on Santa's EXTRA-NICE list this year because he got a gigantic bag of weed for Christmas.

There's no doubt in my mind his holiday was lit AF (literally), and we're all a little jealous.

I mean, c'mon, you have to admit: Waking up to a satchel of fresh bud in your stocking is a little bit better than a gift card or a bundle of new socks.

Santa Claus didn't leave this lucky stoner the gift, though. In fact, his girlfriend did, so he might as well wife her up while he can.

Based off how happy he seems in a video that captured him unwrapping his present, I'm going to assume he's planning his proposal as we speak.

Upon discovering the goods, he throws his arms back and yells with disbelief at the bag of Mary Jane his bae gifted him.

Then he excitedly picks up the bag of weed and opens it up.

Needless to say, it's gigantic.

In fact, after the atrocity that was "this year," I think we all deserve to be gifted a hefty bag of weed, don't you?

Let's get back to the dude in the Christmas footsie pajamas because right now, it's his time to shine.

As the video continues, the lucky guy picks the bag, holds it to his face and takes a big whiff of the greens.

Apparently, he was so stoked about the way it smelled that it nearly knocked him out of his seat.

Who am I kidding? He's more than fine.

Just when we thought he couldn't get enough of the bud, he takes a chunk out of the bag and holds it up to his face like he's about to engulf it.

It's safe to say none of us were as happy as he was after being given a holiday gift this year.