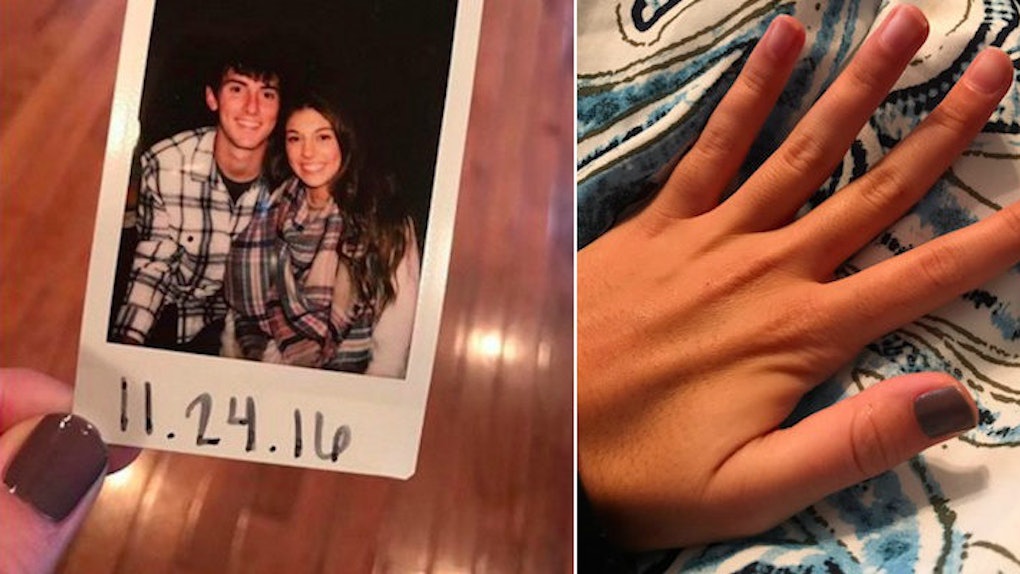 I've definitely been guilty of painting a nail or two for the sake of a good photo.

I mean, I'm no hand model. My nails are short and stubby and never fully-manicured, but a fresh coat of polish will do wonders if your fingers have to be in the spotlight.

Apparently, a Twitter user named Riley thought the same thing before sending an adorable photo to her boyfriend via text.

In the photo, Riley's holding a polaroid of her and her bae, Trent, with the date they snapped the picture written beneath them.

Believe me, it's precious.

In order to achieve such a flawless photo, Riley had to make sure her thumb nail was painted.

Why? Because painting your nails is the lady equivalent to a dude wearing a tie. It just ~completes~ the look. (Don't judge us.)

To ensure the picture was perfect, she slapped a few coats of brown nail polish on her thumb and held the polaroid in way that was aesthetically pleasing.

Then she sent it over to Trent.

To Riley's surprise, her boyfriend of almost one year caught her "brown" handed. He absolutely suspected she painted her thumb nail just for the picture.

Riley quickly tweeted a screenshot of her text conversation next to a picture of her polish-less nails, and captioned it, "I'm embarrassed."

Needless to say, Twitter got a kick out of it and the post has already accumulated over 68,000 likes and over 35,000 retweets.

Riley spoke with Elite Daily about her reaction to the photos going viral.

Well at first, I honestly didn't think it would get very much attention. I thought it was funny he knew me that well and called me out... and a few of my friends may laugh.

But then I woke up with thousands and then the next day more and more. And then famous accounts started tweeting it, so I knew it was going viral and I couldn't believe it! I'm amazed, and I still can't believe it.

Although Riley was busted, people are certainly swooning over how close her and her boyfriend are.