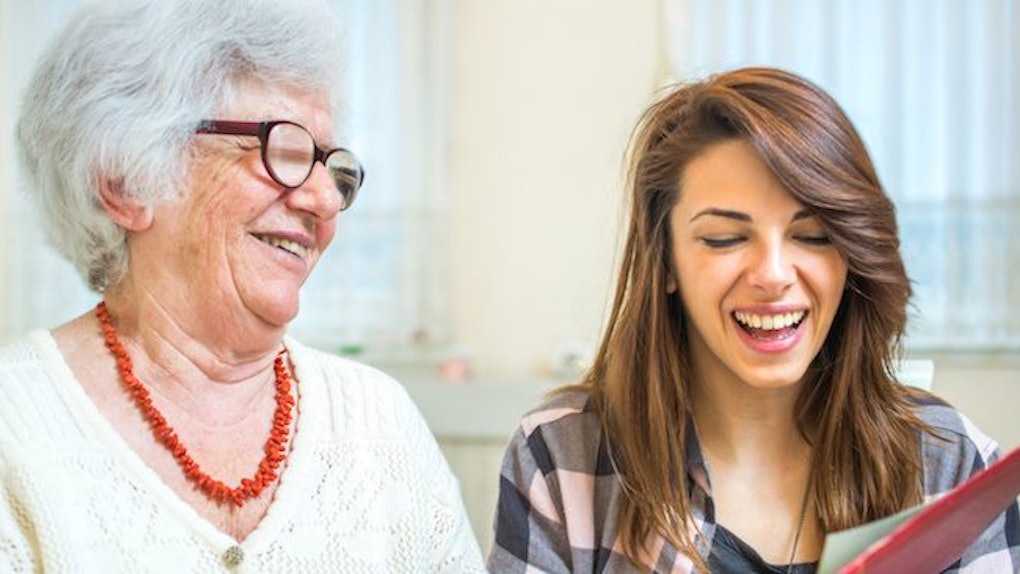 Among other things, the year 2017 is more or less here to show that grandmas are amazing, and they're good for so much more than just baking tasty AF pies on special occasions. And, seriously, UK-based Twitter user Charlie's recent messaging exchange with her gram pretty much proves it. Naturally, Twitter was all over their conversation, confirming that this grandma is the best friend we all want.

According to Mashable, Charlie's grandma was getting ready to go to a wedding when she sent her granddaughter a mirror selfie of her look. Charlie responded like any bestie would and let her gram know that she was lookin' gooood, and then Charlie requested a selfie to get a better look at all the glam.

Grandma did not disappoint. She sent back a flawless pic -- complete with perfectly executed eyebrows. I think Charlie said it best when she replied, "LOOK AT THEM BROWSSSSS."

Finally, this fashion-forward grandma sent her granddaughter a side view of herself, and Charlie was here for it.

The adorable exchange between the pair made its way to the internet when Charlie posted it to Twitter, with the caption "get a best friend like me." From the looks of the responses, grandmas have been doubling as besties for quite a while now. Twitter users jumped at the chance to applaud Charlie's relationship with her gram. They also took to Twitter to respond with proof of their equally fab grandmas.

There was a lot of love for the pair and their aww-inducing messages.

Then there were the stories (and dabbing videos) of all of the awesome grandmas that Twitter could handle.

Twitter could not get over the expert selfies Charlie's grandma was serving.

So, the next time you're getting ready for a night out, maybe send a quick pic to gram and get the approval of your OG bestie. If you're lucky, she'll send a killer selfie right back to you.