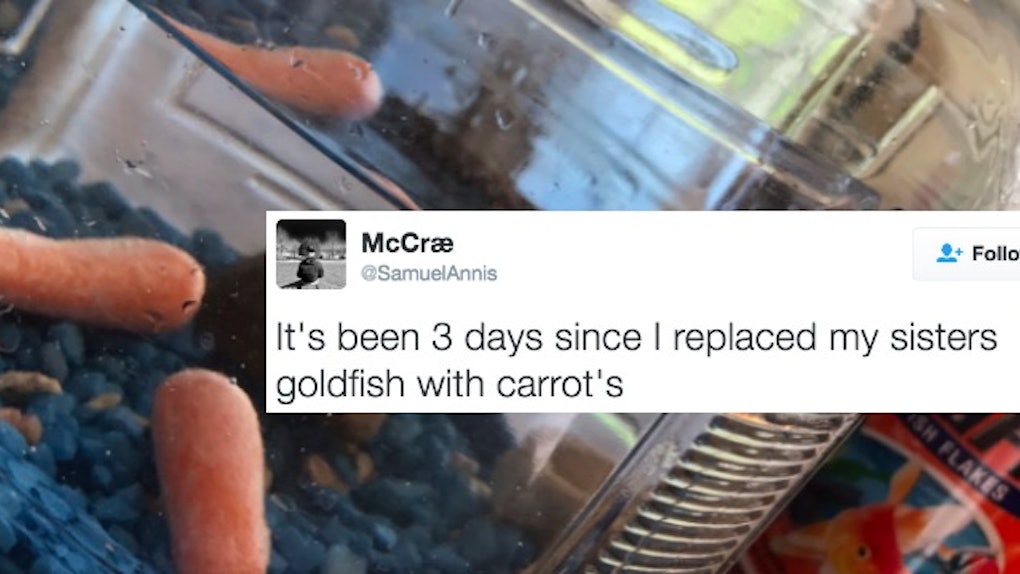 Girl's Goldfish Replaced With Carrots By Brother In Prank

If TV sitcoms and social media have taught me anything, it's brothers and sisters love to play pranks on each other.

One time (I'll never forget), my brother and I each got five different tubes of flavored chapstick for Christmas, and I ate them all.

It wasn't really a prank. I was just a weird kid who ate things.

Then (this is hilarious), I ate all of his Play-Doh. Again, it was not really a prank.

OK, so maybe my brother and I weren't big on pranks; maybe we liked each other too much for the mean-spirited jokes; maybe he just took pity on me because I was a weird kid who couldn't stop eating things...

But this innocent prank about switching out goldfish for baby carrots is genius.

One Twitter user @SamuelAnnis tweeted out a prank that he was on day three of.

He switched his sister's pets with baby carrots.

She still had no idea.

By day four, she was still oblivious. One wonders if she was as quick-witted as me and feeding her new pet baby carrots?

*Dips goldfish in some Ranch dressing.* NO, NO, NOOOO. Not again.

Samuel reassures those following the story the fish are safe in his tank, where they are being well taken care of.

They do seem happier with Spongebob than they were in that jug.

Speaking of which, maybe this sister doesn't deserve the goldfish. A jug as a home? And she still can't tell they're baby carrots?

She's not even taking care of the baby carrots properly.

TBH, if she's gone this long without realizing her fish are now baby carrots, then they are probably safer in the brother's care.

Maybe she's feigning ignorance until she has a good comeback though. LET THE PRANK WAR COMMENCE.