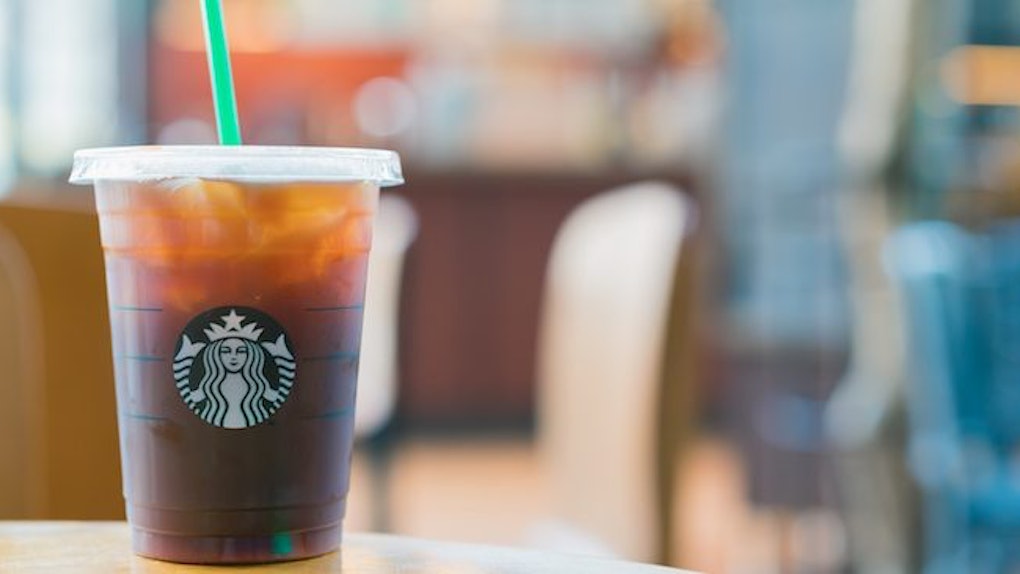 You may or may not be aware of the elusive Starbucks Secret Menu. The menu, which is nowhere to be seen on display at Starbucks stores around the country, is known by true Starbucks fans who love unique and delicious hand-picked beverages. It's made up of fun, caffeinated concoctions you've probably never heard of before. One girl in particular got creative with it by making up a fake Starbucks drink, and telling a friend it was on Starbucks' Secret Menu Needless to say, her friend believed her.

How can you blame her friend, though? Between the Unicorn Frappuccino and the Pink Drink, Starbucks trends happen on the reg, and it's really, really freakin' hard to keep up. Hell, if someone told me about an obscure drink and said it was on the Secret Menu, I'd probably believe them.

Laylah, the 17-year-old Starbucks jokester, filled up a clear Starbucks cup with blue Gatorade (the ombré she created is on point). Then she Snapchatted her friend Brooke a picture of the icy "Starbucks" drink. When Brook saw the Snap, she asked Laylah what the drink was, to which the teen replied, "It's a Frappajappajooza."

Based off the intricate name, you'd probably assume this was a joke right off the bat. Brook was definitely hesitant about the beverage, and asked if it was an actual thing. Of course, Laylah replied and said it was on the Secret Menu.

Again, the Secret Menu is elusive AF and no one really knows everything that's on it (unless you're a serious Starbucks connoisseur). Brook probably didn't know Laylah was joking and believed her trickster-of-a-friend. Hopefully she doesn't go to Starbucks and order a Frappajappajooza, because that'd be awkward as hell.

Apparently, Twitter got a kick out of Brook's gullible ways. After Laylah tweeted the pictures of her drink and the screenshot, she received over 349,000 likes in two days.

The tricky teen even inspired a few others to make fake Starbucks drinks of their own.

Other People Are Having Fun With The Joke.

Well, at least the internet got a kick out of this. Brook, on the other hand, probably did not.