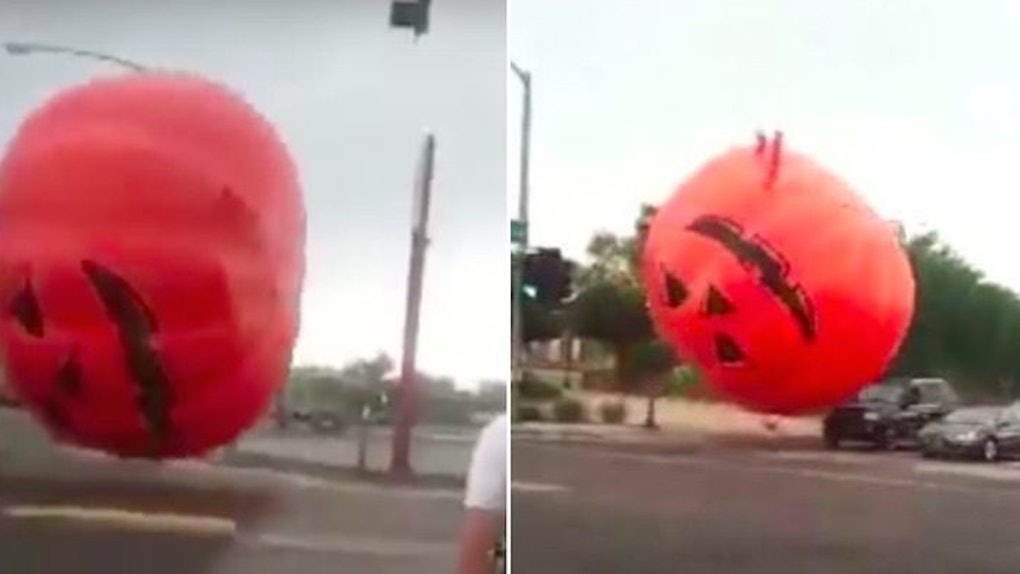 Don't tell this humongous pumpkin where to spend Halloween.

It will spend it wherever it damn well pleases.

When Big AZ Promotions strapped down the 25-foot-tall, 350-pound inflatable jack-o-lantern (I'll call it Benicio for the purposes of this post) amid a Halloween display in the Peoria Sports Complex in Peoria, Arizona, it wasn't expecting the pumpkin to wander.

Not one to be held down on a windy fall day, Benicio broke free and rolled through traffic, getting stuck momentarily beneath a traffic light that was since repaired.

The pumpkin's travels were captured on video by Diego Ramirez.

When employees of Big AZ Productions were alerted to Benicio's rogue move, they drove for 40 minutes trying to track the pumpkin down.

They eventually tracked Benicio to a park where the giant inflatable might have been trying to score drugs but could have also been reliving its youth as a small, plastic pumpkin.

Like, oh my God, I didn't know it was going to go that far… I was so shocked to see that it was like bouncing like a basketball all the way down the road.

This is so heavy, and the straps, it just like ripped the rings out, went rolling down the streets.

Benicio, a non-violent thrill seeker, injured no one during this big day out on the town.