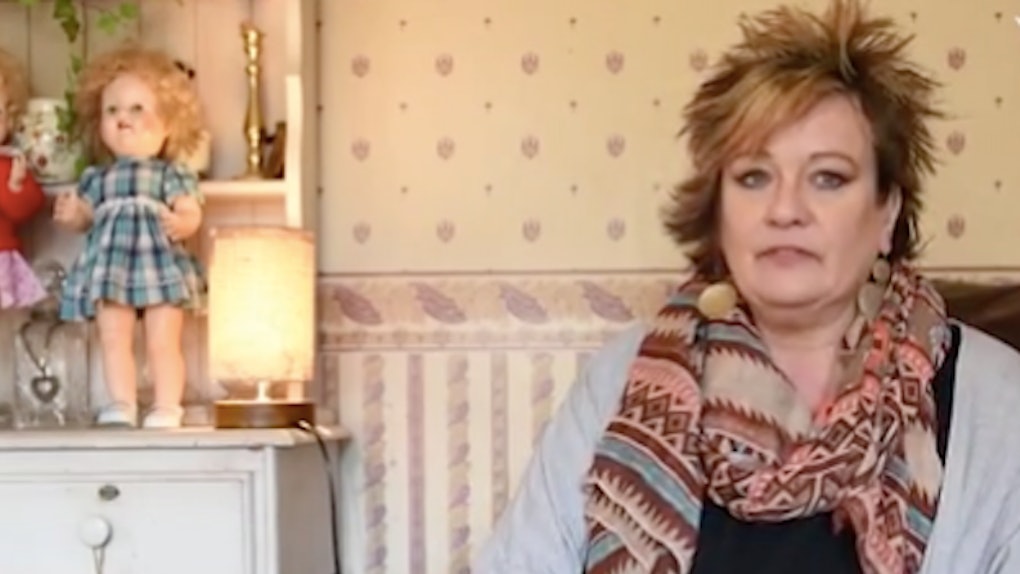 Talk about bad luck in love.

A woman from Wakefield, West Yorkshire, claims a "man-hating black monk ghost" has been haunting her for the past 14 years, scaring away boyfriends, male visitors and even her sons when they come home to visit.

52-year-old Tracy Proctor says the ghost has regularly moved objects like keys and glasses around her home, and more specifically, the ghost also loves to pull the underwear down on her antique dolls.

Proctor said the ghost is the reason both of her sons, 31-year-old Glynn and 24-year-old Alex, moved out of the house.

Apparently, current and former boyfriends have even said they've witnessed the spirit and felt its presence.

Proctor also claimed the paranormal being has continued to affect her dating life: "It has definitely stopped me having relationships and if I meet someone then I know what is going to happen and that I am not going to see them again if they come back to mine."

When my son came back from university, I said he could stay in a bedroom I can feel is particularly demonic. I thought initially that he was making it up when he said that he could hear footsteps - I told him it was the dogs, but he said that they were in the bedroom with him. He was so freaked out by it that he had gone when I came back later that day and I was alone. There have been so many stories and I have just had to get used to it really.

In fact, Proctor's gotten used to the presence so much, she even said she feels protected by the ghost.

She claimed, "It's quite a nice feeling actually because when I am feeling low, I can feel like a cloak coming over me and it is like the spirit is protecting me."

Proctor went so far as to bring in professional paranormal activity experts (and brothers) Mark and Darrell Vernon, who videotaped Proctor in her living room.

The footage revealed a soft, white orb floating past her head, and both Mark and Darrell confirmed it was enough evidence that something paranormal is definitely happening in her home.

Mark stated, 'There is definitely something happening there - she is not crazy - and we will get it 100 per cent."

For now, Proctor appears to have no plans to move out of the home, as she continues to adapt to the spooky occurrences and feelings around her.

In a video interview, Proctor said, "I can sit without the telly on, nothing, and I feel like I'm not alone. Do you know what I mean? I just feel there's something there ... But it's a comfort."

Catch the whole video of Proctor below:

Citations: Grandmother, 52, says a man-hating 'black monk ghost' is driving her boyfriends and sons away from her home and likes to pull down her antique dolls' knickers Read more: http://www.dailymail.co.uk/news/article-4207102/The-man-hating-ghost-driving-grandmother-s-boyfriends-away.html#ixzz4YCk7PVKj Follow us: @MailOnline on Twitter | DailyMail on Facebook (MailOnline)