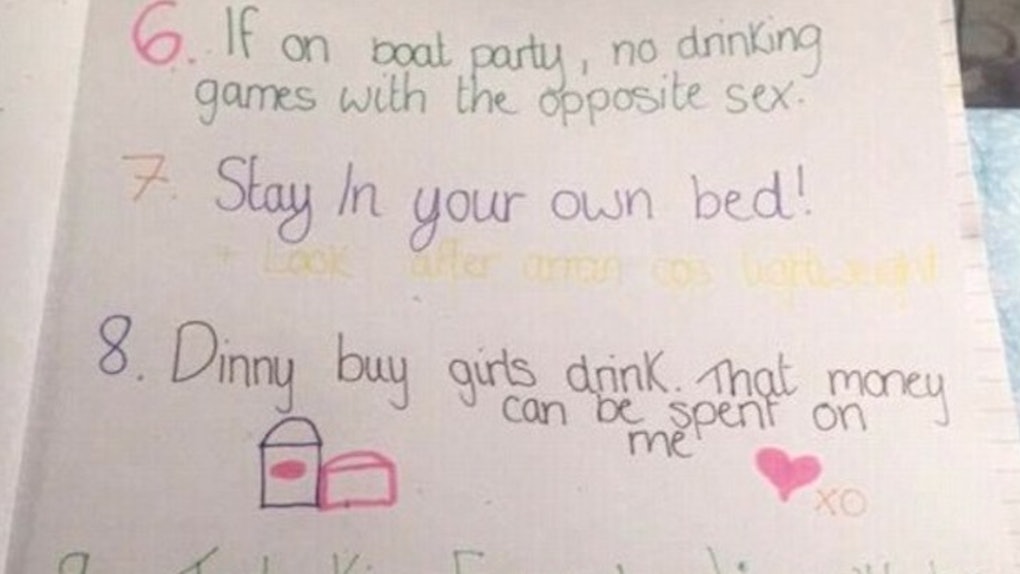 Good luck with life, Kieran Lumsden: It's going to be filled with irrepressible rage and jealousy.

This guy – who's from Edinburgh in Scotland – was handed the most insane list ever by his girlfriend before he went on a boys' vacation.

You see, for those who live in the UK, it's like a rite of passage to go to the Spanish island of Magaluf. It's got such a gnarly reputation for extreme frat boy behavior that it's been nicknamed "Shagaluf."

In fact, recently, officials brought in laws to completely ban people from drinking on the streets.

It changed nothing. (*Packs bags*)

So, it was with that knowledge that Kieran's SO, Whitney Travers, wrote a scary instruction manual:

Here's the list, if you're struggling to read it through all the colors:

1. Make sure your phone is charged at ALL times! Phone me at least once a day (2 mins)

2. No girls whatsoever. Don't look. Don't talk. Do not touch!!!!!! (Cheat and I will destroy everything celtic, I will also make your life a living hell. KIM WILL BE TOLD 2.)

6. If on boat party, no drinking games with the opposite sex.

8. Dinny buy girls drink. That money can be spent on me.

10. You tell every girl about me ok - if someone flirts, WALK AWAY - NO PHOTOS WITH RANDOM GIRLS OR SC STORIES

But of course, she ends with, "Have a nice flight, stay safe."