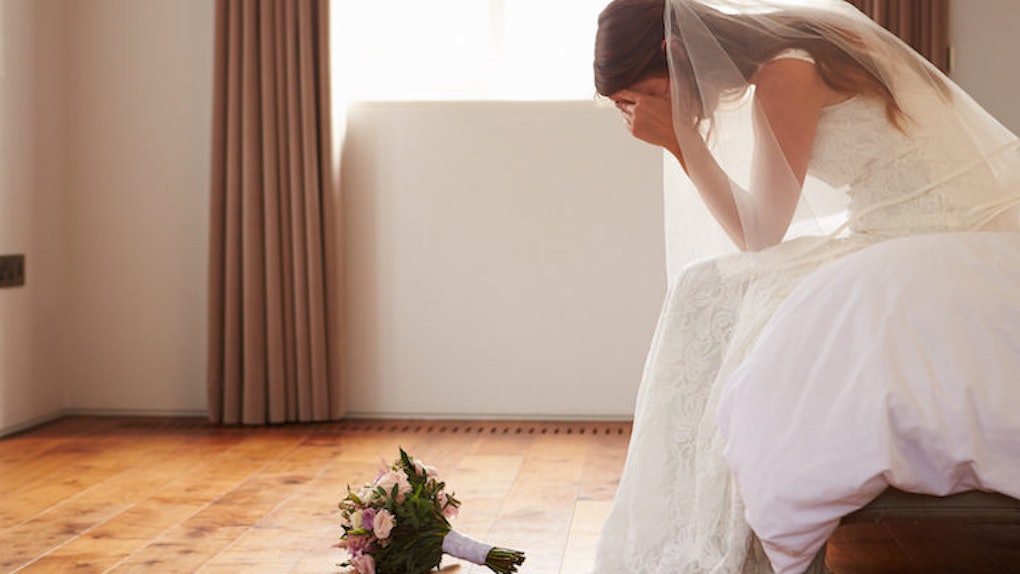 Woman Getting Married Soon Finds Out Her Fiancé Is Her Brother

Just six weeks before getting married to her "soulmate," a woman found out her fiancé was actually her half-brother.

I mean, can you imagine anything worse? I can't.

Like, seriously. There is no worse situation when it comes to your love life, as far as I'm concerned.

Husband of 25 years had an affair with your best friend? Not as bad.

Mom had sex with your live-in boyfriend? Child's play compared to this.

High school sweetheart came out as gay and admitted to having an affair with your stepdad? STILL could be worse.

LITERALLY NOTHING could be worse than finding out the love of your life is, in fact, your BROTHER just weeks before your wedding.

When she was working on wedding invitations, her mother-in-law-to-be asked her to invite one more guest: her son's real dad.

She showed the bride-to-be a picture of his real dad and, what do ya know, IT WAS HER DAD, TOO.

And possibly the worst part of it all? Her fiancé knew.

People on Reddit were mostly just pissed at her fiancé for keeping it from her for an entire year:

Here's the thing...he LIED to you for a whole YEAR about something really, really important. How can you ever trust him again?

He knew. He didn't tell her. For a YEAR. Who knows what else he hasn't told her.

I couldn't be with someone like him for the simple fact that he didn't say anything until you found out, OP. What else is he going to hide from you throughout the years if you decide to go through with this. Also, if you honestly feel that you will never be able to get past him being your biological half brother, then do not marry him.

You didn't do anything wrong, but it is okay, normal, and healthy to decide that the biological relationship and his lying are dealbreakers.

He lied by omission for a year. That's a deal-breaker. As someone who saw red flags but still married the guy, I can say that divorce sucks more than breaking off an engagement does. It's better to have the "divorce" before the wedding.

Wow. As others have said, this is a huge thing to keep from you for so long. By keeping it from you for that length of time, he took away your chance to attempt to figure it out together from the very beginning. Which is a thing I think most successful partnerships need. I imagine you're feeling like you've been tricked into this situation, into doing things you wouldn't have done had you known. If you're interested in keeping the relationship going, I'd certainly recommend couples counseling. And if not or you don't know then at least counseling for yourself. I'm so sorry you're going through this.

If he hadn't kept it from you, I would say make a decision based on how you feel and not how you think others will perceive your relationship. However, if I found out my fiance had kept a monumental secret so he wouldn't lose me, I'd get the fuck right out of there. Who's to say he won't keep another monumental secret from you? Example: what if he found out a year ago that he had HIV, but kept it from you so you wouldn't leave him? Even if you didn't contract it, he was still willing to hurt you to keep from being hurt.

I don't know if I would marry someone who willingly betrayed me by keeping the truth from me. I would never be able to trust him again after he'd already proven when life throws curveballs he makes decisions on his own. Without. You.

Your half-brother lied to you about your actual relationship to get you to agree to marry him? I mean, I've heard of red flags...but this is a line of red flags running for miles.

I've gotta say, I'm right there with them. How could you marry someone who is not only your brother, but ALSO kept this colossal secret from you for a whole year?

I mean, as someone who is currently not in any way, shape or form related to her boyfriend (or so I think and desperately hope), it's easy for me to say that I would end it immediately.

Like, OBVIOUSLY I would not marry my creepy, secret-keeping brother.

But, then again, love makes people crazy. And I can't honestly say what I would do unless I was put in her position myself.

I guess they could still be good friends (or, you know, build their sibling relationship) even if they decide it's too nasty to continue on with the sexual part of their relationship, WHICH THEY TOTALLY SHOULD, BTW.

But even then, HOW do you just casually hang out with your sibling knowing full and well that the two of you have banged?! I don't think there's a way.

Do any of you know what you would do in this situation? Comment your thoughts below!

I'm sure she'd love some advice.