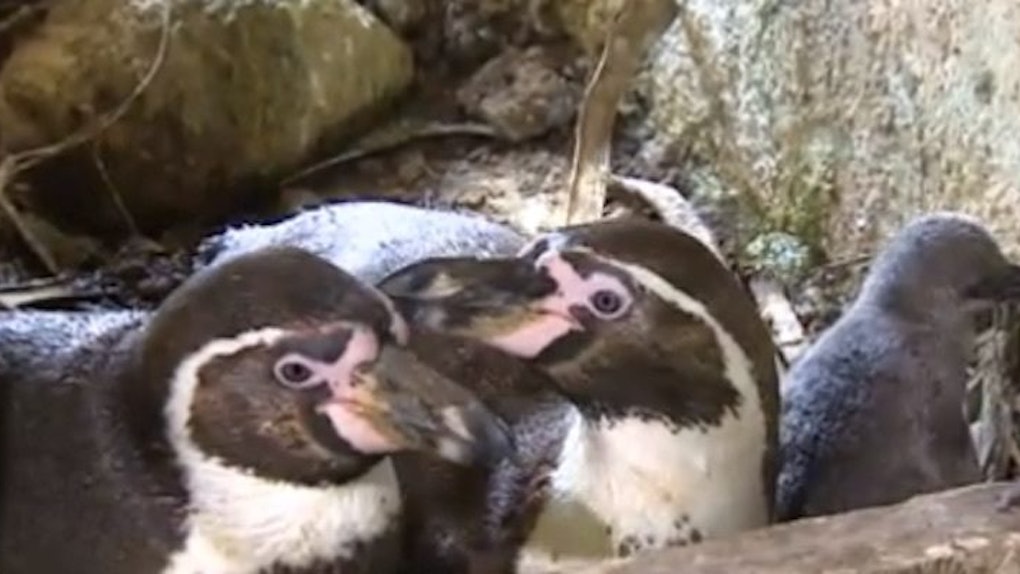 Love is pretty complicated. Falling in love with someone can send you spiraling into a manic state of euphoria.

But on the flip side, the blissful feeling of love can quickly turn into heartbreak. This just leaves you feeling hopeless, lonely and empty inside.

Love can be a real motherfucker. Last week, we told you the insane tale of love and betrayal that occurred with a penguin, his unfaithful lover and a feathery homewrecker.

If that wild love triangle made you made you both laugh and cry your eyes out at the same time, you might want to grab a box of tissues.

Apparently, that's not the only penguin relationship that will send you on an emotional rollercoaster.

Allow me to introduce you to Dotty and Zee.

These penguins just celebrated their 10-year anniversary together.

If that's not enough to give you all the feels, you'll be glad to know these two are actually gay. Yup, it turns out even gay penguins can find true love.

In case you're wondering, no: These two love birds did not meet on penguin Grindr.

Instead, Dotty and Zee waddled into each other at the Bremerhaven Zoo in Germany, and fell hopelessly, head over webbed feet for one another.

The gay penguin couple built a nest and tried to start a family, but with little success.

After a few years of failed attempts, the zoo finally decided to run some tests on the penguins in order to get to the bottom of their reproductive problems. A simple DNA test revealed what the issue was: Dotty and Zee were both boy penguins.

Luckily for these two, Bremerhaven Zoo is pretty pro-gay penguin marriage. So, they were able to continue their same sex romance.

The zoo even let the penguin papas adopt an egg that was rejected by a mother penguin.

These gay penguin dads took care of the adopted baby bird like it was their very own chick, and the cute AF penguin family lived fabulously ever after.

Don't you just love a feathery fairy tale with a happy ending?

Apparently, these two aren't the only gay penguins at the zoo, either.

Dotty and Zee are both an endangered species called Humboldt penguins, and it's estimated there are only 2,000 of these guys left in the world.

In an effort to boost the population, Bremerhaven Zoo took in six female penguins to help these guys breed.

However, three out of the 10 feathery couples turned out to be gay.

The gay birds refused to cheat on their penguin life partners, even after the zoo encouraged these gay penguins to get it on with the new lady penguins.

So, yeah: I guess it's safe to say this particular species of penguin appears to be a BIT more loyal than those cheating penguins we told you about last week.

The three gay couples stayed together, showing us that they are really strong relationships.

Seriously, with all these gay Humboldt penguins, it's no wonder the species is on the brink of extinction.