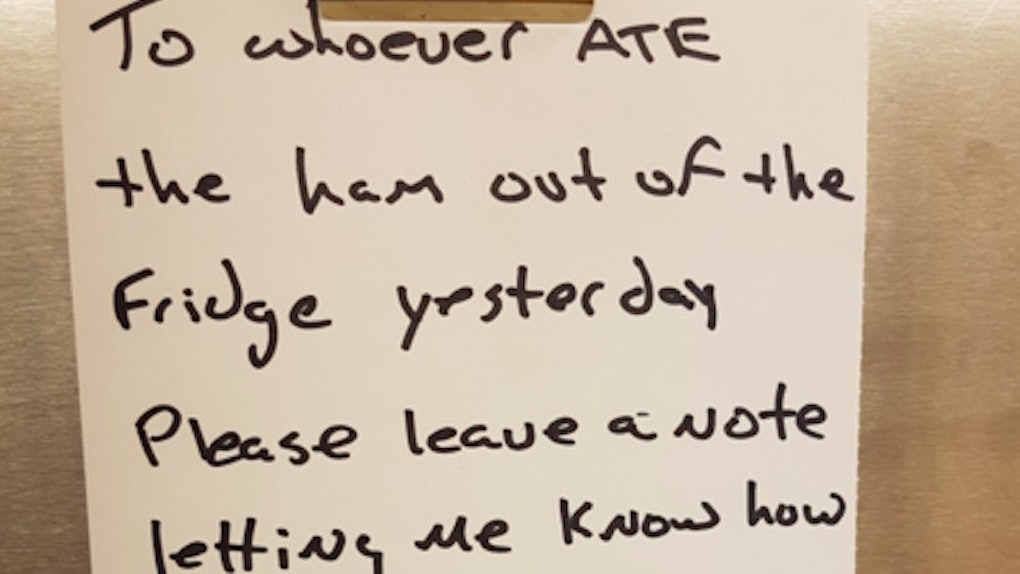 Worker Leaves Note On Fridge For Thief Who Stole His Lunch

Someone ate Wayne's sandwich at work.

Sorry, but I don't think you're grasping the seriousness of the situation.

Some savage dude dove into the communal fridge and brazenly swiped Wayne's lunch.

He's never done anything to anyone. He doesn't deserve this. It was ham, FYI.

Wayne's far too shy for confrontation. You know that. So, when the time came to say something about his sandwich theft, he didn't square up to Joe from accounting and propose muskets at dawn (although that would have been cool).

He wrote a note and slapped it on the fridge. I say slapped, but knowing Wayne, he probably delicately placed it under a clip he especially bought from Home Depot that same lunch break.

To whoever ate the ham out of the fridge yesterday, please leave a note letting me know how it was. Thanks, Wayne.

WHO DARES INCUR THE WRATH OF WAYNE?

Alas, friends, we shall never know. The person who left a response – on the same piece of paper, no less, not separately as Wayne clearly instructed – did not leave a name. COWARD.

He did, however, leave an alarming heap of sass for poor Wayne to clear up. The thief said,

Savagery of the highest order, and a damning indictment of Wayne's sandwich-making skills.

Someone took a photo of the insult, and now, it's found its way onto Reddit.

Obviously, commenters laid into the thief, and called for a public hanging of anyone heartless enough to steal someone else's lunch.

Others claimed much more sinister forces were at work.

And still others branded it as fake.

Just so you know, Wayne no longer brings lunch to the office: He buys it from the deli across the street every day at noon.

His budget does not allow for this and, sadly, a strain on his finances has led to the breakdown of his relationship. He moves out from the home he shares with his partner on Thursday.