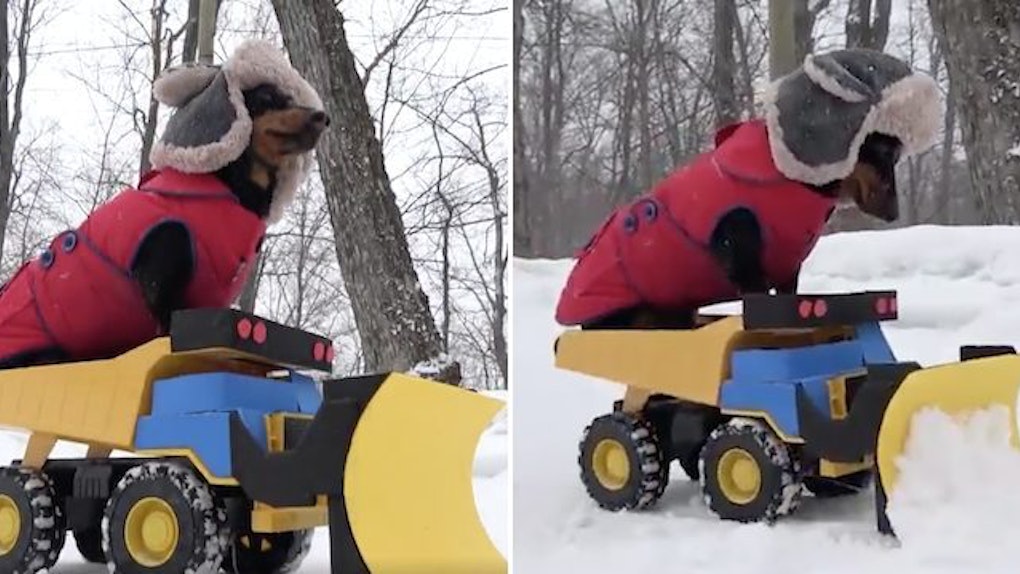 East Coasters, how are you holding up out there?!

Blizzards suck, but they're also pretty awesome. Look at the bright side, Mother Nature probably granted you the day off due to the icy roads and transportation service outages.

That means you got to stay home, sleep in and binge-watch your favorite shows mid-week while shamelessly stuffing your face with snacks all day long.

What's not awesome about that?

Well, I guess not being able to leave your house might be a downer. That's exactly why you should have called up Crusoe the Dachshund. This little pup's got all the tools needed to rid your driveway of snow and ice.

Blizzard problems? Give me a call!

Accompanying the call to action is an adorable video of the little Dachshund "operating" a mini plow truck in the middle of winter storm Stella (while you were probably curled up in bed).

Sporting a red fitted winter jacket and a dapper trapper hat, Crusoe wastes no time plowing away at the snow so you don't have to.

Snowed in? No problem. Just call up this little Dachshund named Crusoe, and he'll get you out and about in no time.

From the looks of it, people wished they'd heard about Crusoe's plowing services a lot sooner.

It looks like he'll still be helping a few other people out, though.

I'll admit my dog has it way too easy.

If only he'd learn how to operate a mini plow truck, he'd have as many fans as Crusoe does.

This isn't the first time Crusoe has put his fearlessness on display despite the frigid temperatures and unpredictable weather conditions.

Last week, the little wiener dog took his talents to the backyard for some "goalie practice."

Um, yeah, my dog's life is way too easy!