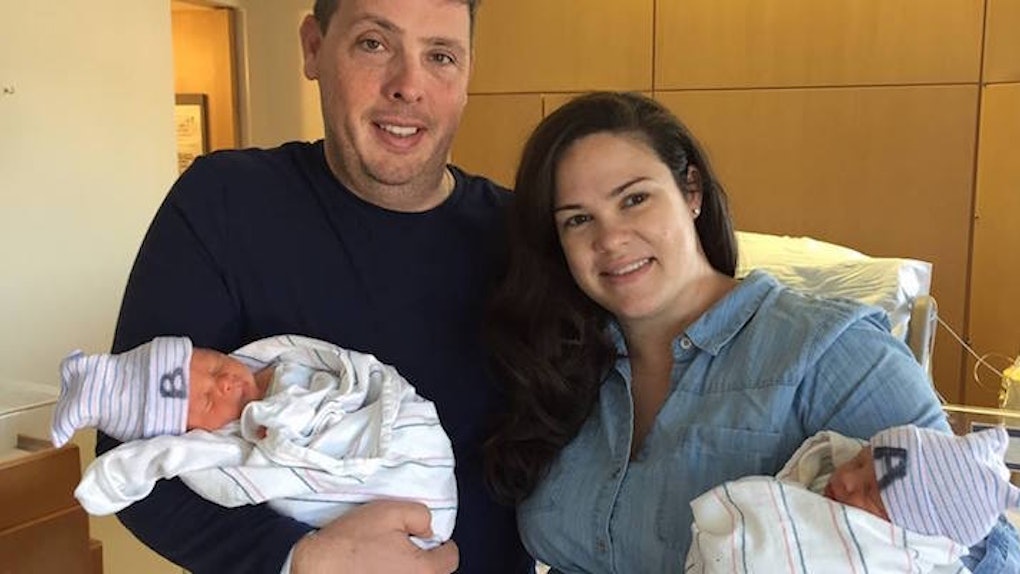 Time can be a weird concept to grasp.

Thanks to things like time zones, two events can happen at the same exact moment in two different places, yet technically occur at different times.

Plus, daylight saving time can also cause a lot of confusion about what time things actually go down.

In the wee hours of November 6, the Cape Cod couple welcomed twin babies into the world.

However, daylight saving time created a lot of confusion as to which one of the twins is actually older.

But by the time Ronan arrived, daylight saving time had already kicked in, thus, turing the clocks back one hour.

So technically, baby Ronan was born at 1:10 am, therefore making the younger twin "older" than his first born baby bro, Samuel.

Yep, talk about a birth announcement that doubles as a serious riddle.

Apparently, births like this are a pretty rare occurrence because, according to a Facebook post from the Cape Cod hospital, one of the maternity nurses, Deb Totten, revealed this was the first time she had ever seen something like in her 40 years of working as a nurse.

A lot of people are saying this whole ordeal is seriously bizarre.

In bizarre Daylight Saving Time twist, one twin who was born after the other in Massachusetts is older on paper. https://t.co/MSSBksvTi7 pic.twitter.com/tOPuSOMNsK — ABC News (@ABC) November 11, 2016

While other Twitter users are trying to lend an explanation to those who are still confused about how the younger twin can actually be older.

1 twin was born at almost 2am, the other 31 minutes later, but because of Daylight Saving, the younger brother is technically older. — Just Joe With It (@IsThisShitOn) November 11, 2016

Some people proposed a way to clear up the confusion by making a note of the daylight saving time debacle on the twins' birth certificates.

Others poked fun at the strange situation by making jokes about the inevitable argument these brothers are going to have about who's really older.

Seriously, though, I think it's safe to say that this guy is totally spot on about what these twins are going to have to deal with every time someone asks about their ages.

Good luck explaining that to all the people you meet throughout your life https://t.co/FSrb5v2skJ — Jeremy Donovan (@jmdonovan9) November 11, 2016