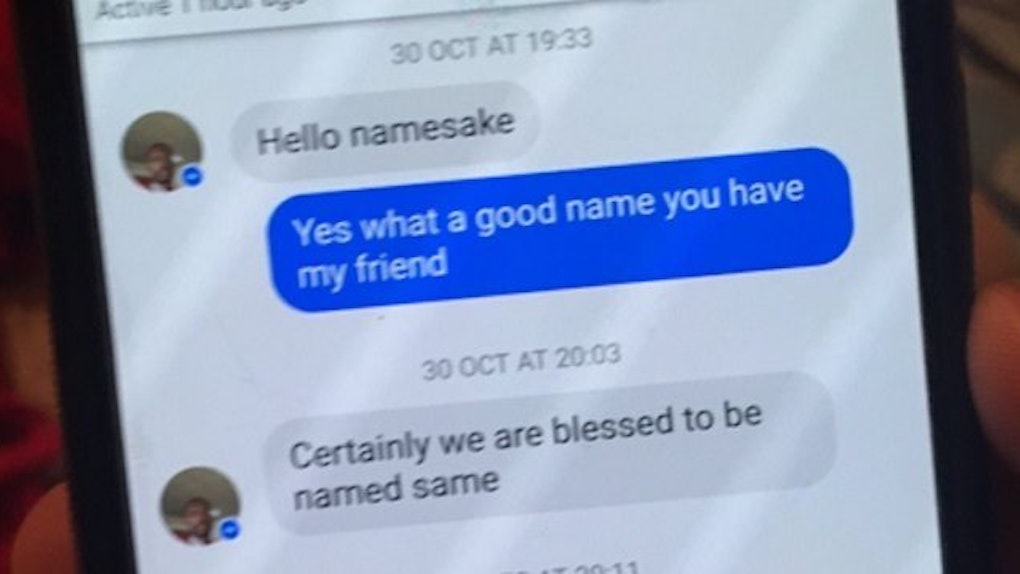 Dad's Friendship With Guy Who Has Same Name Is Funny AF

Meeting someone with the same exact name as you is always a little bit awkward, whether you meet in person or on the internet.

I know this for a fact because I met another Amanda Fama online last year. We started following each other on Instagram, and I quickly learned she's a badass softball player with platinum blonde hair. Sometimes we like each other's posts, but that's the extent of it.

We never went as far as actually having a conversation with one another, unlike the Anthony Freeman bros.

In her tweet, she shared screenshots of the adorable back-and-forth messages her father and the stranger had on Facebook Messenger.

Apparently, the Anthony Freeman her father met is from Moyamba, Sierra Leone.

He reached out to the other Anthony in October, and said, "Hello namesake."

In response, Holly's dad wrote "Yes, what a good name you have my friend." Then, the conversation went on for a month and a half.

Now, they're such close friends that they're asking how each other are doing, conversing about the weather, and of course, saying a word or two about politics.

I think their friendship is written in the stars.

The last screenshot shared shows Anthony from Africa wishing Holly's dad seasons greetings, and they wish each other a happy new year.

In fact, it's so serious that Twitter has been obsessing about their relationship and praising for Holly's dad for being such a nice dude.

"'Remain strong' is my new mantra."

It's wholesome, that's for sure...

He's a true gentlemen. Anthony himself even replied to this one:

As a joke, Holly's dad even tweeted at his daughter in third person complimenting himself.

I don't know about you, but I'm pretty sure this is a blossoming friendship that's going to last a very long time.