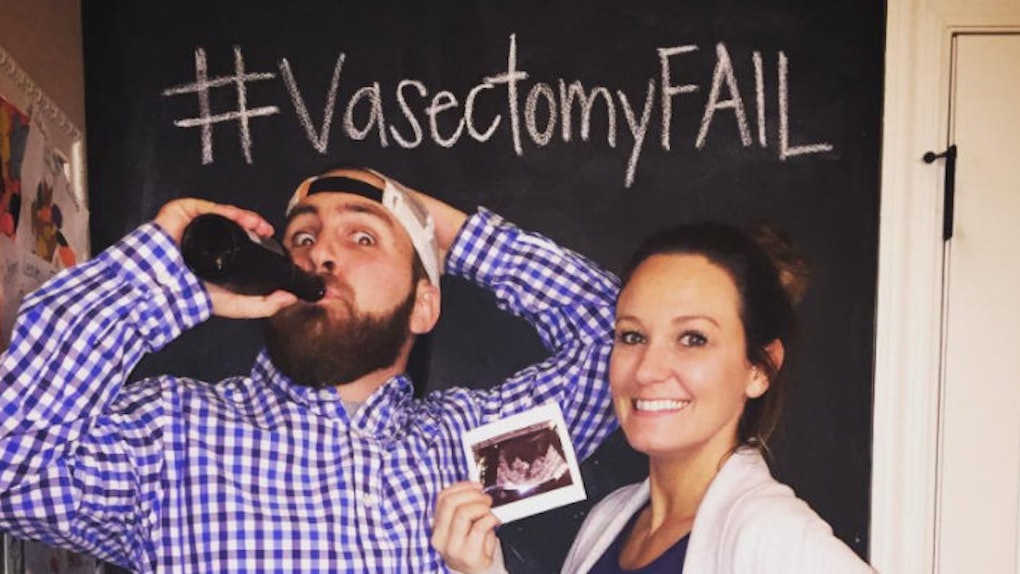 Dad Is Suspicious When Wife Gets Pregnant After Vasectomy

If you're a husband who had a vasectomy, then I think it's OK to kind of be suspicious of your wife when she tells you that she's pregnant.

What are the chances, right?

Even the most devoted of wives would raise a few eyebrows.

Colby and Ashley Grace, 29 and 30, were happy with four children after the birth of their daughter Paisley in 2013. So in 2015, Colby and Ashley agreed he would get a vasectomy -- which means the ol' tubes that his little swimmers travel through would be cut or sealed.

Apparently, those spermies are fighters.

However, Colby's operation failed, and Ashley became pregnant with their fifth child. She said,

He asked me if I'd cheated.

Right away, Colby defended himself,

I asked because it was such a moment of shock. But really there were no doubts.

Ashley, who is studying for advanced qualifications to become a family nurse practitioner, admits that Sawyer, born June 10, 2016, was a surprise for everyone.

However his older siblings, Lanie, 12, Noah, 8, Kellan, 5, and Paisley, 3, were all very excited to welcome their little brother into their family.

Ashley says that they've been called the "most fertile couple ever," adding,

When he got the vasectomy, people joked that it would fail. I didn't believe them, but there was never any doubt in my mind we'd keep Sawyer. He is our son. When he arrived, I couldn't believe it. I thought I was done with being a mum. He was always meant to be.

Vasectomies are more than 99 percent effective. Out of 2,000 men who are sterilized, one will get a woman pregnant during the rest of his life.

So, there are doubters.

We've had some people claim the baby is not Colby's, which is so negative and hateful. But we are strong and know Sawyer is ours.

Colby even underwent another vasectomy, which the surgeons performed for free -- five is enough for this couple.

Citations: Dad of FIVE accuses wife of cheating after he has a vasectomy and she falls pregnant again (Mirror)