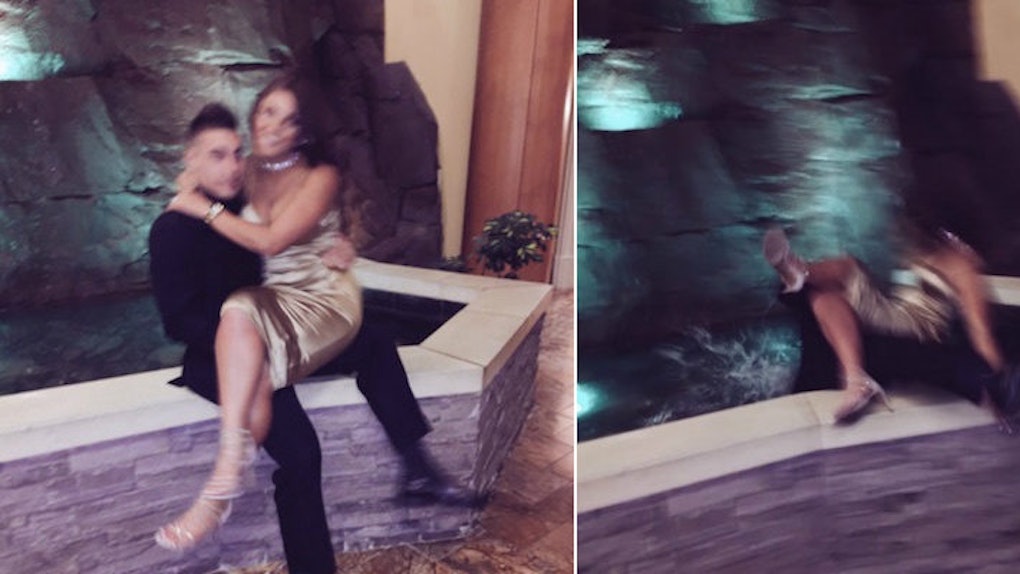 Couple's Picture Fail Sums Up All Our Relationships

Taking the ultimate couple pic is a true art form.

From the moment you've assumed position in a cutesy pose with bae, you must remain still until the perfect photo has been taken.

Sometimes, it takes hours of repositioning, re-applying makeup, getting the correct lighting.

Some of us make it through the grueling process without flaw, while others handle the heat.

Twitter user Elaina Vecchio tried taking an epic picture with her boyfriend last week, and they both ended up getting really, really wet.

They fell into a fountain, guys! Get your minds out of the gutter.

Elaina posted a series of three photos taken simultaneously as she and her boyfriend, Nino, fell backward into the water behind them.

Luckily, she was a good sport about it and posted the pictures on twitter, and captioned them, "When taking pictures with your bae goes wrong."

In fact, your photos pretty much sum up every relationship we've ever been in.

They start off flawless until you fall backward into a fountain of shame.

Here's a better look at the photo trilogy of Elaina and Nino.

They start off looking dapper AF. What could possibly go wrong?

Now, for the fountain pose. Balance must remain perfect. Focus is key.

Oh, no! Too much focus! TOO MUCH FOCUS!

Well, it was a good attempt, guys!

Whoever took these photos must've whipped out his phone for some bloopers after the photoshoot, because a video after the fall was posted on Twitter.

Alas, taking the perfect couple pic is hard work, and you need to be ready for anything.

But if you aren't balancing on top of your boyfriend next to a water fountain, you're probably in good shape.