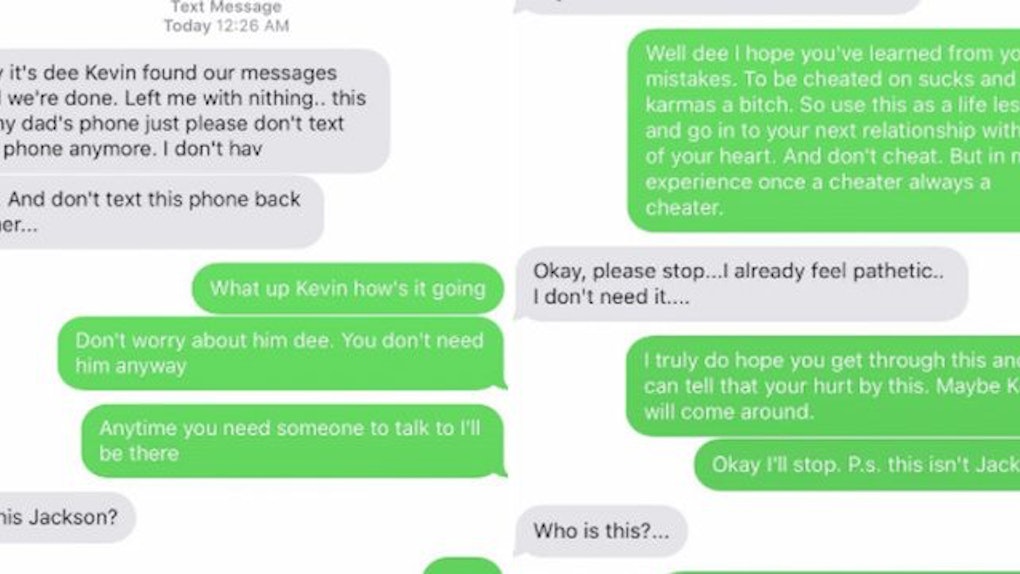 Most of the time, dialing the wrong number results in a swift hangup.

However, sometimes, accidentally contacting a random stranger can have a totally unexpected outcome.

Remember when we told you about that adorable grandma who accidentally texted Thanksgiving plans to the wrong number, then invited the rando over for dinner anyway?

Well, if that sweet conversation gave you all the feels, you'll be glad to know that generous granny isn't the only one sending some heartwarming messages to the wrong number.

We recently came across a girl who texted a wrong number after her boyfriend broke up with her for cheating on him.

However, rather than being a complete d-bag and telling her to take a hike, this stranger decided to comfort the cheating girl and he even gave her some pretty solid life advice.

The conversation starts off with the girl, apparently named Dee, texting a message to whom she thinks is the guy she cheated on her ex with, Jackson.

In the text message, Dee tells the guy to stop texting her phone because her boyfriend found out about their relationship and it's over.

The stranger replies by telling the sad girl she doesn't need her ex anyway, then lies about his true identity when the girl asks if she's speaking to Jackson.

She starts to open up about how sad she feels, then sends a text message, saying,

I devoted everything to him... like, I gave him everything... my life my love and most of my belongings. I knew this would happen... [This] is my fault.

The guy gives this unfaithful girl an unexpected dose of reality by replying,

Well yes it is your fault. If you truly devoted everything to him you wouldn't have gotten involved with me.

Then he dishes out some words of wisdom, writing,

Well Dee, I hope you've learned from your mistakes. To be cheated on sucks and karma's a bitch. So use this as a life lesson and go into your next relationship with all of your heart. And don't cheat. But in my experience, once a cheater, always a cheater.

The guy wishes her all the best, saying,

I truly do hope you get through this and I can tell that you're hurt by this. Maybe Kevin will come around.

Then drops a bomb on the girl by writing,

When Dee asks the mysterious guy to reveal his true identity, he replies, "just some random stranger that's been cheated on."

Maybe Dee will think about this kind stranger's advice next time she's tempted to stray away from her significant other.