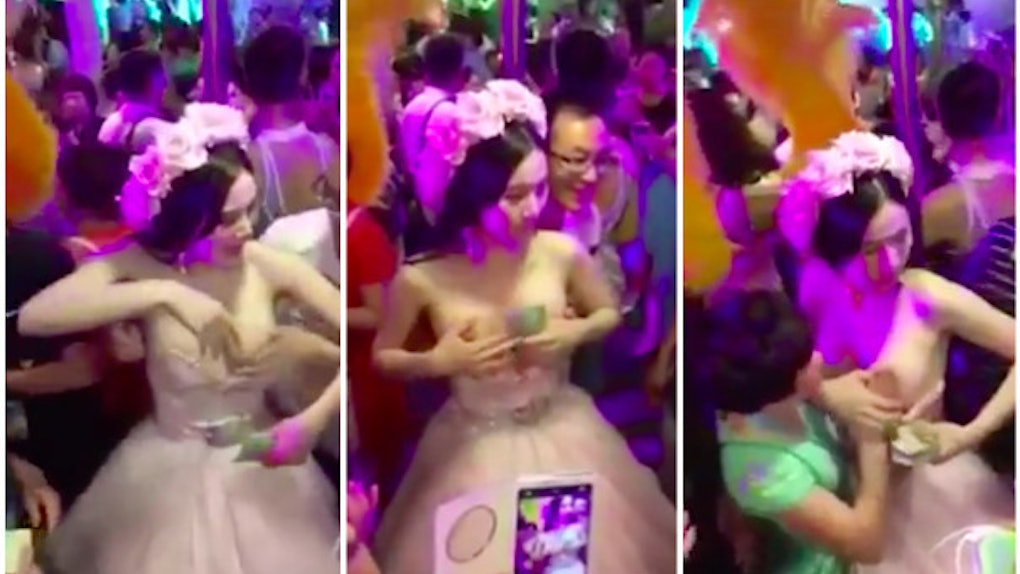 Weddings and honeymoons are incredibly expensive, but how far would you go to get extra cash to foot the bill?

Probably not as far as letting people grope you.

Apparently, this Chinese bride needed money so bad, she let guests touch her boobs in exchange for cold, hard cash.

But how hard can we really judge her? She apparently needed more money for her honeymoon. Everyone deserves a honeymoon. And budgeting is hard sometimes.

Maybe in this situation, passing a basket around for honeymoon donations wasn't good enough either.

So, we don't know the identity of this woman, where exactly this video was taken or who captured it, but you can see the bride in question pull down her dress so male guests could touch her breasts — after they give her cash, of course.

Some viewers suggested that the woman is just wearing a fancy dress while surrounded by Chinese tourists in a Thai cabaret nightclub.

That theory makes more sense, honestly. You can totally see a pole behind her and not one person in the video is dressed like a wedding guest.

If so, that would be a super casual wedding.

The bride literally grabs these guys' hands and places them on her breasts.

This isn't a side hustle anyone should try, people.

She also let them rub their faces in her chest while onlookers snapped photos.

After two guys grope the bride, she lets a woman touch her breasts.

In the video, it totally looks like the bride goes for a kiss, but the female "guest" rejects her.

In the background, people are dancing, completely unaware that this is going on. However, she does have quite a crowd around her.

Maybe it was fine because those "guests" were doing it for a good cause.

It also could have been her husband's suggestion. Who knows?

Either way, it's pretty fucking weird.

Citations: You may now grope the bride: Chinese newlywed 'allows guests to molest her during the ceremony to raise money for her honeymoon' (Daily Mail)