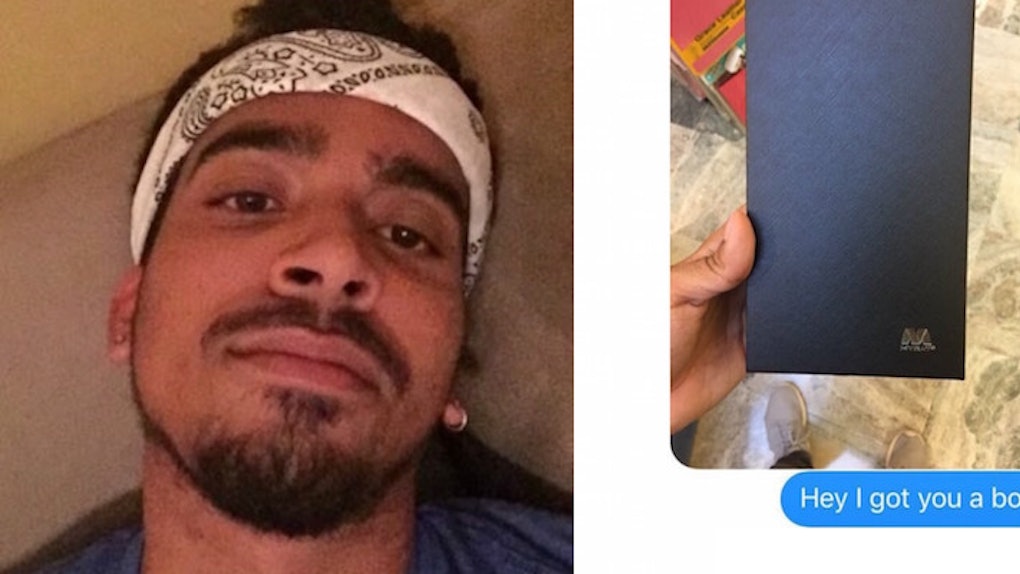 Guy Gave Empty Box To GF And She Loved It

Among other things, the holiday season is all about being thankful and grateful for what you have.

I'll admit I still feel kind of weird gleefully smiling after unwrapping a fresh, new pair of socks on Christmas, but the truth is I should be thankful no matter what. Believe it or not, some people don't have socks.

When one guy gave his girlfriend an empty box as a gift, she was more than grateful, and her reaction says it all.

Meet Braxton Sislo, a 21-year-old from New Orleans. He gifted his 2o-year-old girlfriend Ray an empty box for Christmas.

Sislo, who works at a cell phone store, was handed the empty box by his boss.

Not knowing what to do with it, he gave it to his girlfriend.

Let's be real, most of us would have reacted like this...

But Braxton Sislo's girlfriend Ray was BEYOND thankful for the box and her text message reply proves just that!

During a recent interview with BuzzFeed regarding the empty box and his girlfriend's priceless reaction, Braxton laughingly said,

I was both surprised and not surprised by her reaction. She's always been a woman that is grateful for the little things… But at the same time I wasn't expecting all of that.

He's right. She had the same exact reaction she would have had if she was given a brand new Range Rover like Blac Chyna gave Rob Kardashian.

Of course, the Twitter community just could NOT get enough.

Braxton's next step? Hopefully a ring for his grateful girlfriend (sorry for the pressure, bro).

Of course, people decided to try the "empty box" stunt on their own significant others.

Overall, it's quite clear Braxton Sislo has a certified keeper on his hands. Anyone who reacts that way to a priceless gift like an empty box deserves all of the luxuries in the world.

At this point, Braxton just wants to clear the air -- he didn't give her an empty box for Christmas.

The 21-year-old told reporters the empty box was simply a "thinkin' about you" gift and that he made sure to get her something really nice for Christmas. She earned it!

Warning: Give your significant other an empty box AT YOUR OWN RISK.

Citations: People Love This Girl's Joyful Response To Her Boyfriend Gifting Her An Empty Box (BuzzFeed)