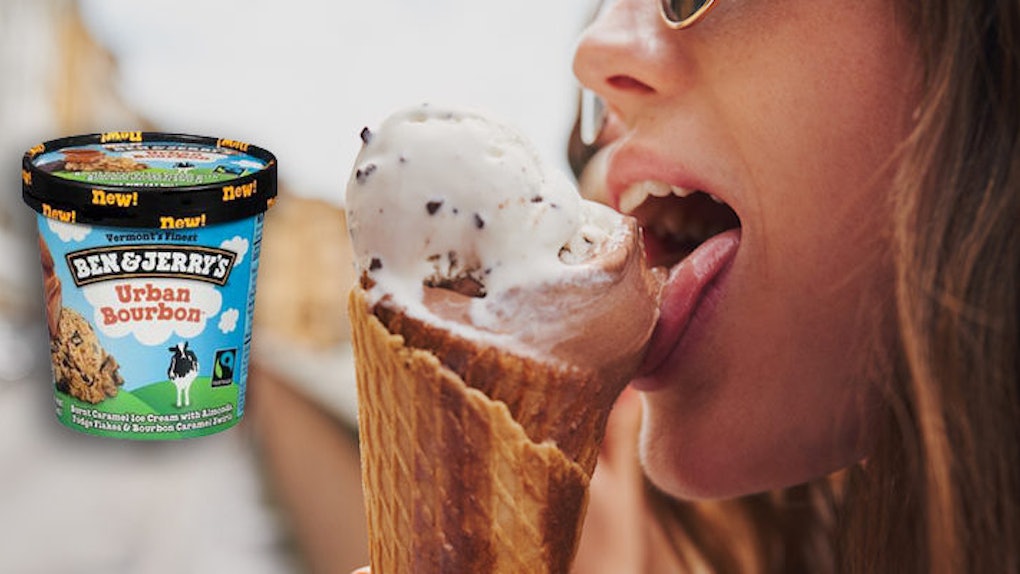 In case you're unaware (which, you probably are considering a majority of you don't know me), my two favorite things are as followed: bourbon and ice cream.

Pour me a shot or take me Ben & Jerry's, and you'll be my favorite human on the face of the planet — guaranteed. I'm obviously easy to please.

Right now, I can barely contain my excitement because my two favorite items are about to merge into a one delicious ice cream flavor.

It's called Urban Bourbon, and it looks orgasmic.

The description on the ice cream's pint that was posted on the Candy Hunting Instagram page describes the flavor as "burnt caramel ice cream with almonds, fudge flakes and bourbon caramel swirls."

It's basically the ice cream of our dreams because we'll be able to indulge in our favorite sugary treat while simultaneously boozing up.

Yup. I'm about to pre-order these babies by the dozen.

Unfortunately, the boozy flavor isn't on the market just yet — so we'll need to be patient. Based off the teaser Instagram post, it'll be available in just a few months.

According to Thrillist, there are a ton of signs that confirm the flavor will be released before we know it.

Apparently, Walmart already has a page dedicated to Urban Bourbon, but it's still blank and anxiously awaiting the flavor's highly anticipated arrival.

It's also been reported Ben & Jerry's already trademarked the name "Urban Bourbon," which pretty much solidifies the fact that the flavor is on it's way to our freezers.

Once it's on the market, I'm digging in.

If you're a tried and true Ben & Jerry's fan like me, you're probably aware this isn't the only flavor that's making moves in the world of adult ice cream.

Last year, the Vermont-based company released a flavor called Empower Mint, which was meant to inspire people to participate in democracy.

But after the results of our 2016 presidential election, we could all use a little alcohol to ease the pain — and Urban Bourbon is our saving grace.