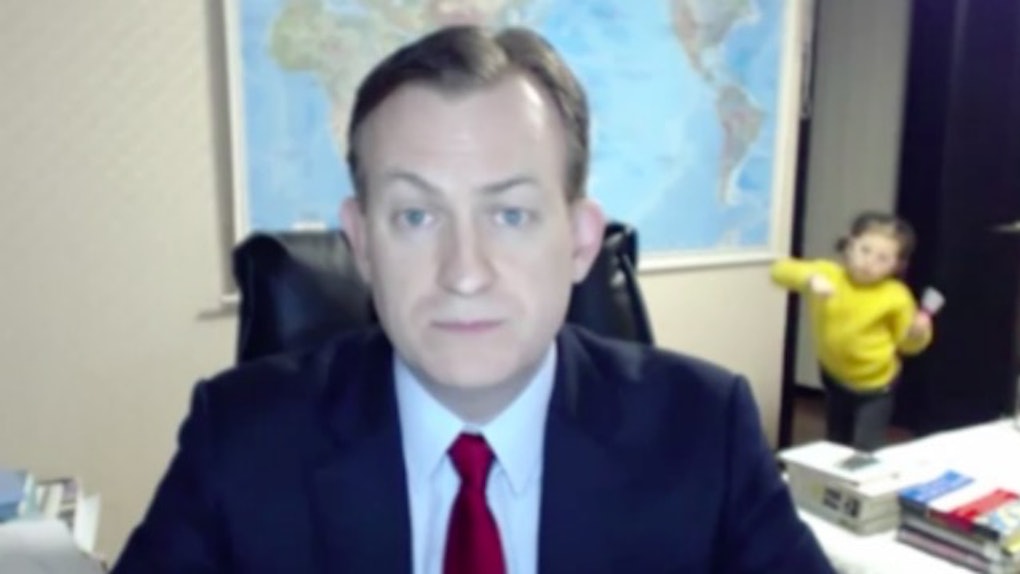 It's true what they say. Children are nature's candy.

Oh, God, wait. That's raisins. Children are God's gift! I. Am. So. Embarrassed.

Robert Kelly may be an expert on Korea and a professor of political science at Pusan National University, but none of his knowledge or expertise could make me love him more than his daughter.

It's like, get out of the way, brainiac -- your daughter dancing into a frame is my lifeblood.

It wasn't long until the internet fell in love with the girl in the highly fashionable glasses and her brother in a wheelie-bouncing-thing. (Is it obvious I am not around children a lot?)

THEY JUST WANT TO HANG OUT WITH THEIR DAD, AND THAT'S ADORABLE.

James and Marion, the two children, were quick to steal the headlines this past week. But we want to talk about Marion's ICONIC look.

A beige trench coat, the light pink glasses, this is a look that says,

You have no style or sense of fashion.

Sure, we can focus on things like the impeachment of South Korean President Park Geun-hye, and maybe we should...

But also, maybe we can just focus on this DGAF ATTITUDE.

I dare you not to respect the way Marion has the ability to command a room without saying a single word.

Does she owe it to her yellow sweater? Who knows? Everyone has one item of clothing that makes them feel just a bit bolder.

I think the reason why this went viral is because my real life sort of punched through the fake cover I had created for television. I create this veneer of professionalism inside my house. I wear a jacket in front of the camera. Then suddenly reality bursts in.

DO YOU ASK THE SUN NOT TO SHINE, KELLY?!