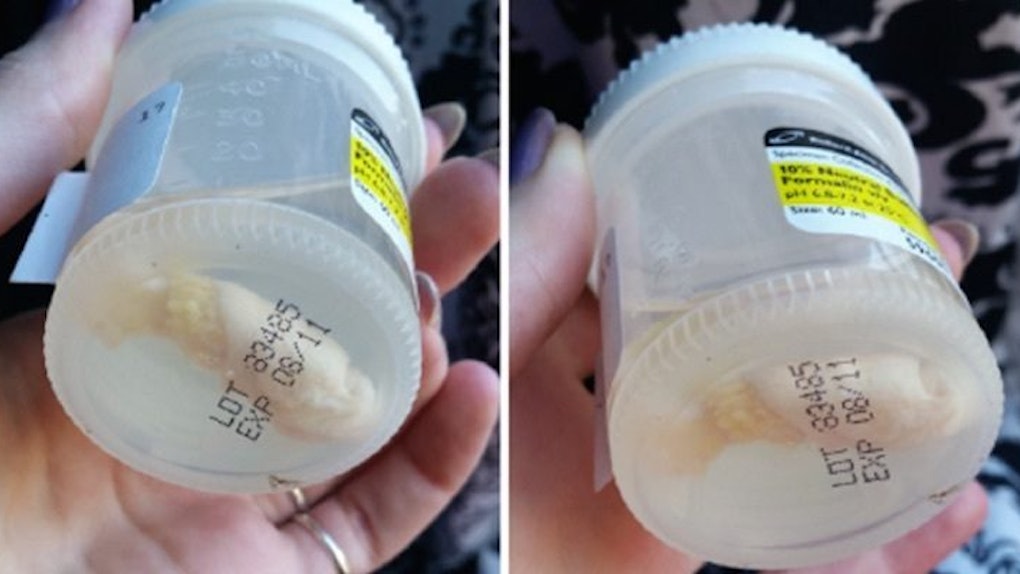 Tumblr is a pretty interesting place.

As a result of Tumblr's unique users, you can never be too sure of what you might run into while scrolling through this strange website.

Case in point: a jewelry maker who was asked to turn an amputated toe into a necklace.

Haley, a Tumblr user from Oregon who goes by username The Royal Oiler, recently sent her toe to another Tumblr user in order to have it turned into a wearable keepsake.

Apparently, the little toe was sent to Lana, a jewelry maker who goes by the username Cummy-Eyelids.

Now I know what you're probably thinking, and yes, most people would be pretty freaked out if they opened their mailbox and found a package that contained a jar with a real toe floating inside.

However, Lana seemed to be pretty touched and vowed to turn the Haley's amputated toe into a necklace for her.

Lana shared a photo of the toe on Tumblr along with a sweet caption that read,

A few days ago I received a very special package [in] the mail. It contained this amputated human toe, belonging to the lovely royallyoily. Like, literally this is a toe off of her foot. I'll be changing the solution, putting it in a new pretty jar, and potentially making it into a wearable pendant. Taking on this project is so super meaningful to me, more so than any other jewelry project i've taken on, including the engagement ring. I'm so appreciative of her trust in me, and I'm so excited to get to work on this!

Now for the question you're probably dying to know: Why on Earth does this woman have her toe in a jar?

Well, apparently, Haley had her toe amputated about 10 years ago and has been holding onto it ever since.

Shortly after Lana posted the photo on Tumblr, Haley responded to her heartfelt message, writing,

Literally brought tears to my eyes. I am so grateful and excited myself. Not only do I absolutely trust your artistic expertise @cummy-eyelids but I also feel my body part (yes an actual piece of me) could not be in more capable hands. I know you will respect and care for my little piggy. I appreciate this more than you'll ever really know!

Now this tear-jerking post is going viral and over the past few days, Lana post has received almost 30,000 notes.

Who knew that one lone, little toe could have such an impact on people's hearts?

Citations: A Tumblr user is getting her amputated toe made into jewellery, because Tumblr (Metro)