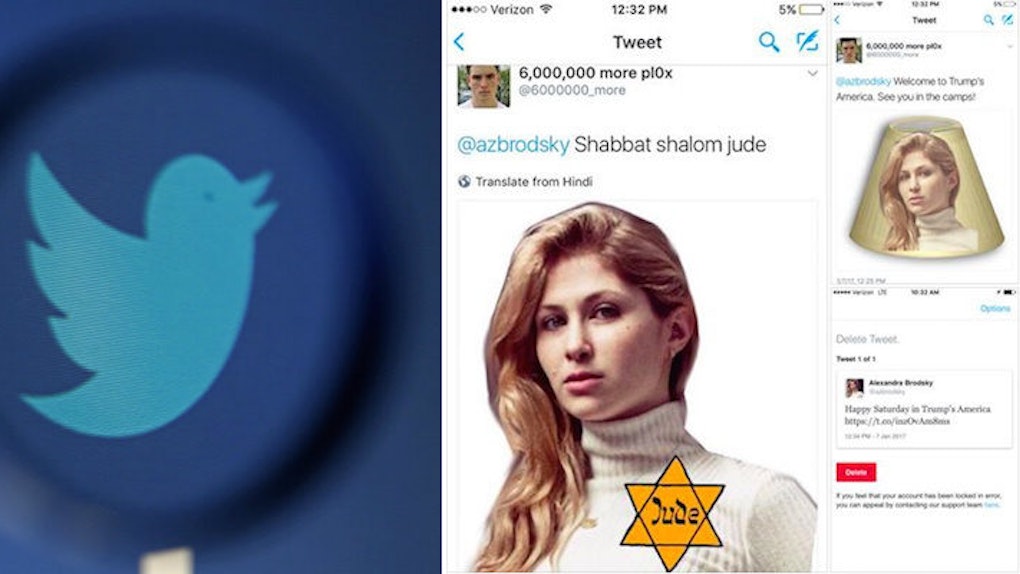 Alexandra Brodsky Banned From Twitter For Calling Out Anti-Semitic Trolls

Alexandra Brodsky started getting tweets from anti-Semitic trolls on Saturday.

They Photoshopped her bio picture. One Twitter user even added the yellow star patch Jewish people were made to wear by Nazis.

The user also put her face on a lampshade, apparently in reference to rumors Nazis made lampshades out of human skin.

Welcome to Trump's America. See you in the camps!

Brodsky reported the anti-Semitic accounts to Twitter on Saturday.

She told Elite Daily it appeared the trolls were targeting Twitter users associated with Know Your IX, a school sexual assault survivors rights advocacy organization that Brodsky had co-founded.

Brodsky took screenshots of the harassment and tweeted them.

She was notified that to unlock her account, she needed to delete the tweet of the screenshots.

So let's get this straight: Twitter still hasn't suspended all the bigots I reported, but they have suspended me for calling out bigotry. I call bullshit.

This is only the latest in Twitter's failure to prevent users from harassment.

Twitter has faced criticism for years over its inability to curtail harassment, even when it's as clearly targeted and discriminatory as the tweets Brodsky was receiving.

But his account was only suspended after her appeals to have it taken down went viral.

Brodsky told Elite Daily she screenshotted and tweeted the harassment because she knew of Twitter's poor history in suspending abusive accounts without public appeal.

[I tweeted because] I wanted to highlight the surge in anti-Semitism tied to Trump and also because it had been very clear that the only way to get Twitter to take action on harassment is to make a little of a public fuss about it.

This was also the latest in a pattern of anti-Semitic harassment related to Donald Trump.

Trump's campaign was marked by its ties to anti-Semitism.

Throughout the presidential election, Jewish reporters were targeted by apparent Trump supporters.

There was an increase in reported racist incidents – which included those that targeted Jewish people – following Trump's win in the election. There has also been a noted rise in blatant anti-Semitism on Twitter.

She was in the middle of tweeting as part of the #DearBetsy campaign when she found herself locked out of her Twitter account. It was started by Know Your IX and End Rape on Campus to address Trump's education secretary nomination, Betsy DeVos, on sexual assault survivors rights.

Instead, she received instructions telling her if she deleted the tweet with the screenshots of her harassment, she could unlock the account.

The email said Twitter "apologize[s] for this error" and included no further information.

I'm sure that Twitter took action more quickly because there was a little of a public stink about it. It shouldn't take a public platform for users to participate in public discourse.

Before her account was locked, Brodsky did not hear from Twitter about the abusive accounts she reported.

The only word she received from Twitter were standard automated responses to report notices, and one automated email notifying her one account had actually already been suspended.

After Twitter locked and unlocked Brodsky's account "by mistake" and her story started going viral, she was notified an account she had reported had been suspended because of her report.

I'm not pleased it happened to begin with. Clearly Twitter needs policies and employee guidance to ensure that users on the receiving end of harassment don't end up punished.