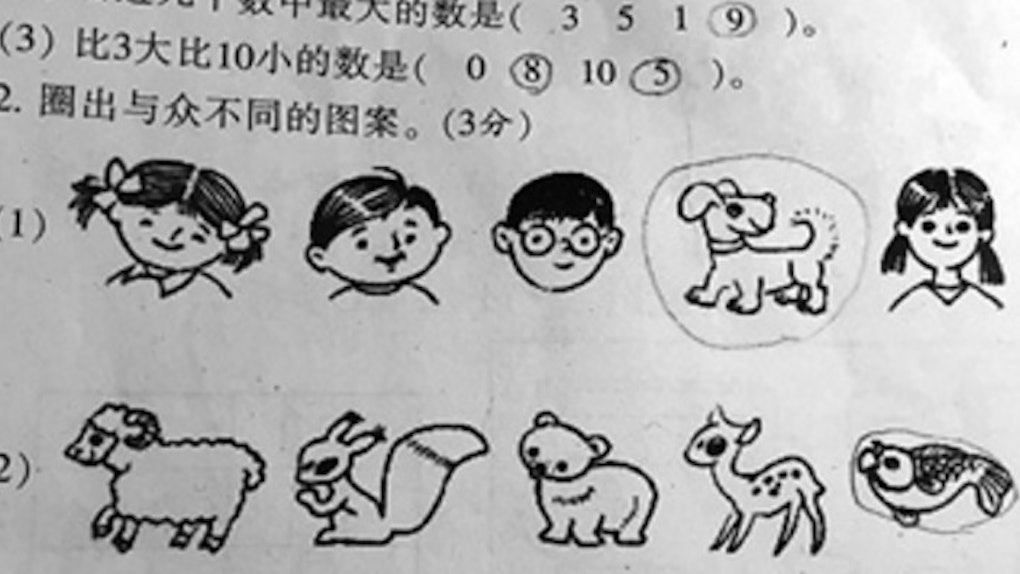 Stare at this math question and procrastinate because it's much more interesting than anything else going on in your office right now.

It was handed out as part of an exam for children at an elementary school in Jiangsu Province, eastern China.

The kids were stumped. When they enlisted the help of their parents, the adults drew a blank too.

A photo of the question has since been posted on China's social media website, Weibo. Adults around the world are fruitlessly trying to work out the right answer.

The question is broken up into three parts. Each one shows drawings of people and animals. The students are asked which is the odd one out.

Give it a go -- when I tell you the answers, you'll kick yourself because it's glaringly obvious.

Did you get it? Let's go through the answers together. Hold my hand.

The answer to number one is the dog, obviously, because it's the only animal among a line of humans, making it the odd one out.

The answer to number two is the fish because the others are land animals.

OK, now here is where it gets a bit confusing. In number three, any of the animals could be the odd one out for a number of different reasons.

But the right answer, according to People's Daily Online, is the chicken. Why? Because it's the only one with two legs, the other animals have four.

BOOM. There you have it.

The website claims the answer is so obvious its headline actually translates as,

Xuzhou grade math "stumped" parents and teachers: it is not difficult.

Do you feel really stupid now?

One teacher told the website both children and parents are stumped by the question because they have different ways of thinking.

Basically, the question is too obscure for kids. It should be obvious to adults, but we overthink everything.