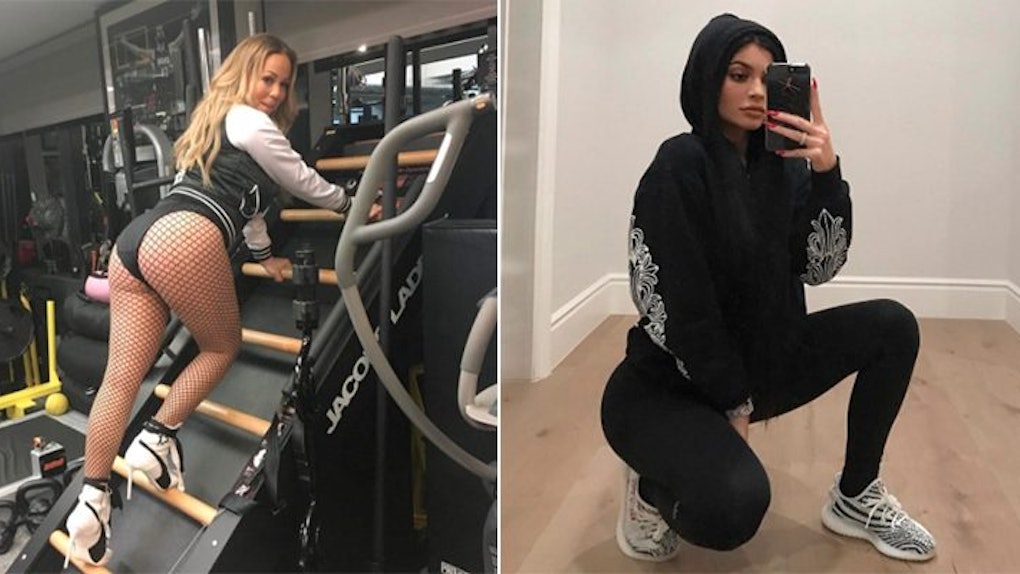 Instagram, for my money, is the best social network out there right now.

The content is aesthetically pleasing, it requires minimal amounts of your attention span to digest and most of our friends are on it (and they leave their political views on Facebook).

Plus, we can't forget the greatest thing about "IG": beautiful people.

The fact that you can look at well-manicured pictures of whoever you think is attractive is a benefit that should keep Instagram in business for years to come. Who doesn't like looking at people who are good-looking?

This is especially true for guy. We just react to visual stimuli much more than women. But even men have their limits to what they're willing to take just to follow a girl they like.

We will definitely hit that "unfollow" button if we see too many of these types of posts:

Pictures from one angle.

There will never not be something suspicious about the a bunch of picture taken from one specific angle. The immediate that comes to mind is, what are you hiding?

Is it a mole? Are you not taking full body pics because you're pigeon-toed? At some point, we'll just got tired of wondering and unfollow.

Girls who are not you.

But if you're gonna do that, at least have the decency to tag your fine friends.

Captions that have nothing to do with your thirst trap.

Listen, I have nothing against thirst trapping, mainly because I'm a big believer in stuntin' (or, for the nerds out there, flaunting), in any capacity.

What I am firmly against is the oblivious stunt. You now, the super sexy photo with the "weather sure is nice caption." You ain't foolin' nobody, bruh.

Just because Kim Kardashian can get away with it, doesn't mean everyone can.

Alright, I know I just said I'm all in favor of stuntin', but real stuntin' gives an impression of effortlessness. Picture that look like you're trying too hard to stunt just look weird.

So yeah, sticking the chest or ass ALL the way out might be a little counter productive.

At times, some of those lengthy posts might have gems in 'em, I'm not gonna lie. But if the good stuff is buried within paragraphs upon paragraphs, constantly?

Nah, I'm not doing to work to find it, and pretty soon it becomes annoying that you're making your followers do that work. A constant stream of what I call "diary posts" can provoke an unfollow.

I like the jail pose when girls do it. It's actually cute, when properly executed.

The posture has to be just right. The posture's not right here, at which point, it's just a waste of time.

Unless your meal is A1 -- like, I mean, truly exceptional -- it's not worth putting up.

At least, not anymore. You could save that for Snapchat, but you know exactly what people expect to see on Instagram: you.

Here's the thing about people who post quote cards: They're never done in moderation.

If you post one quote, you're bound to post another. Next thing you know, your whole feed is filled with fake deep statements paired with a "100" emoji" that no one signed up for.

We ain't tryna see all that.

Just to be clear: This goes for a specific case. If you got followed by a guy who explicitly came to your page because he's interested, a picture with kids is a killer.

The crazy thing is, it doesn't even have to be your kids. Your caption just has to be unclear enough that he's unsure of whether or not they're your kids and he might be gone.

You have to explicitly tag the parents, for real.

The picture of the stair master at the gym.

Some people hate gym selfies in general, I'm not one of those guys.

I will say, though, there's something about the stairmaster shot that's a bit... interesting.

It just seems like too blatant of an attempt to show people you work out more than them, rather than trying to show actual progress.

I'll be honest, I actually think it's brilliant how women (especially) are out here taking advantage of Instagram, for business purposes.

Still, though, once you start promoting something in way that's supposed to look "natural" but is actually super blatant, all I'll see is FAKE NEWS.

That's kind of why I stopped following Draya back when she was doing green tea posts. Speaking of which...

Any picture with your man.

Do I even have to list this? I feel like I shouldn't, but let's just do this for the record. The most obvious type of picture are photos with another guy.

Again, like the baby pics, he doesn't even have to be "your man" necessarily. It just has to be one of those pics where you're sitting on someone's lab, or where he has his arm around you in a way that implies closeness.

How close is that "closeness?"

Again, that's a guessing game that some of us do not have the energy for.