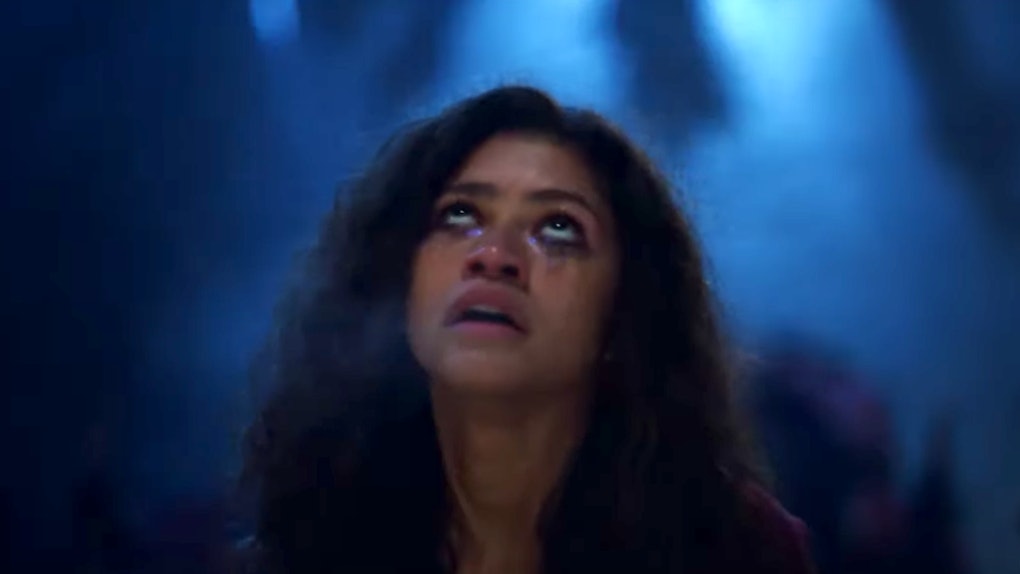 It is safe to say nobody saw the final moments of Sunday night's Euphoria Season 1 finale coming. Not only did the season-ending episode leave fans with a number of jaw-dropping cliffhangers, but even more unpredictably, the episode ended with a massive musical number that served as the surprise debut of a brand new Zendaya song. Now, fans can watch Zendaya's "All For Us" music video and stream the powerful new track to their hearts' content.

The original version of "All For Us" was actually released a little over a month ago and did not feature Zendaya's vocals. The synth-y trip hop track debuted in the third episode of Euphoria on June 30, only this was a solo version performed only by British rapper, singer, and producer Labrinth. Given that the song had already been released in full, there was an added layer of surprise when the final moments of the Euphoria Season 1 finale revealed a brand new version of "All For Us" in which Zendaya performed the song alongside Labrinth.

Spoiler alert: The rest of this post, including the music video for "All For Us," contain spoilers from the Season 1 finale of Euphoria. Immediately after the season finale aired, Euphoria's YouTube page uploaded the entire ending musical number, billing it as the official music video for "All For Us." The video features Zendaya's character Rue stumbling around her house after taking cocaine in a depressing drug relapse, before she joins up with a massive gospel choir on the street outside her house. Check out the new music video for yourself below:

Since the musical scene also served as the final moments of Euphoria Season 1, fans are also reading a lot into what the striking visuals could actually mean for Zendaya's troubled character in the world of the show. In particular, the fanbase is divided over the question of whether the scene is hinting Rue is dead or not.

Right before the musical number began on the show, Rue had just relapsed in a major way, and the video shows Rue not looking too great as she briefly interacts with her mother and sister, but they do not notice her at all. However, her dead father does appear and he interacts with her, leaving some fans to think she is a spirit in the afterlife now. Adding to this theory is the final image in the music video, which depicts Rue falling off of a pile of bodies as she sings about disappearing into the night.

However, given that Euphoria has been picked up for a second season and Zendaya is such a huge part of the show, many fans do not think Rue was killed off in this moment. Instead, the disturbing imagery could just represent Rue turning back to drugs after having been sober for longer than usual.

While the scene is still up for discussion, one thing all the fans agree on is that Zendaya's version of "All For Us" is a total bop. The new song is also available to stream on Spotify right now.

At least now, Euphoria fans have something to jam out to while waiting for any news about the second season of the HBO hit.