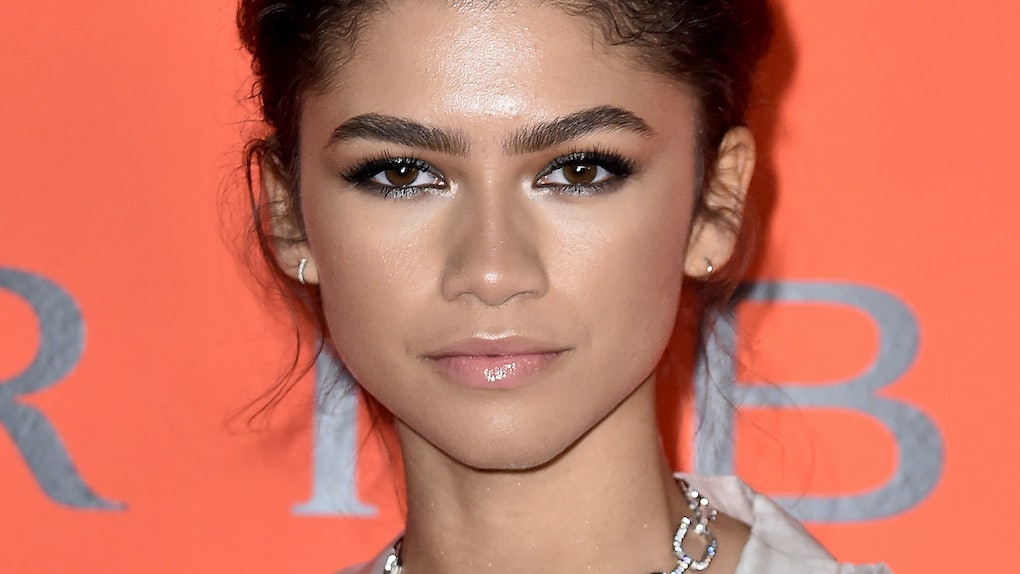 Zendaya's 2020 Emmys Dress Silhouette Is Everything

Despite the ongoing coronavirus pandemic, the show must go on (sort of), and TV's biggest night, the 72nd Primetime Emmy Awards, is here, starting off with one star in particular. Debuted pre-Emmys on Instagram, Zendaya's 2020 Emmys dress, jewelry, and shoes are all just one big *chef's kiss*. Nominated for Lead Actress in a Drama Series for her role as Rue in the instant-hit Euphoria, Zendaya donned a gorgeous Christopher John Rogers number in an Instagram post from her longtime stylist, Law Roach. With huge Bulgari jewels and sleek, sky-high Louboutin heels, Zendaya and her look deserve to be the new Emmys trophy. Is there a petition started for this?

The Christopher John Rogers, who was just named the 2020 American Emerging Designer of the Year by the CFDA, gown strikes a prime balance of over-the-top and refined. The rectangular neckline plunges down to her waist, with thick, short black sleeves fanning outward. Just below a thick, iridescent purple waistband, the gown's purple skirt juts outward at the hip before tapering down tight around the ankles. The shape is fluid yet sharp, and I have a feeling this mixture of soft and hard is a trend the fashion world will continue seeing for some time.

Honestly, this dress is going hard as ever, but Zendaya's accessories go just as hard. The Bulgari jewelry — a tight chainlink necklace encrusted with small diamonds, small green jewels in between, and enormous purple gems so big, you could see them from space if you looked hard enough. The black Louboutin pointed-toe pumps are just the cherry on top, with stunning crystal appliqués.

For Zendaya, this was only look one. She appeared on screen again to accept the award (!!!!!!!!!!!) for Lead Actress in a Drama Series for Euphoria in a completely different, albeit stunning, look.

Sitting in a room surrounded by friends and family, Zendaya wore a custom cut-out Giorgio Armani dress with a completely crystal-studded bra top and an enormous, polka-dotted black skirt, connected by two thin strips of black fabric as a halter neck. IMHO, Zendaya deserves two awards: the one she received and another for these bomb looks.

More like this
The 2021 Met Gala Is Reportedly Still Happening
By Margaret Blatz
Amanda Gorman's 'Vogue' Cover Shows The Poet In Her Natural Form: A Goddess
By Margaret Blatz
These Black-Owned Depop Shops Feature The Coolest Must-Haves
By Theresa Massony
Stay up to date