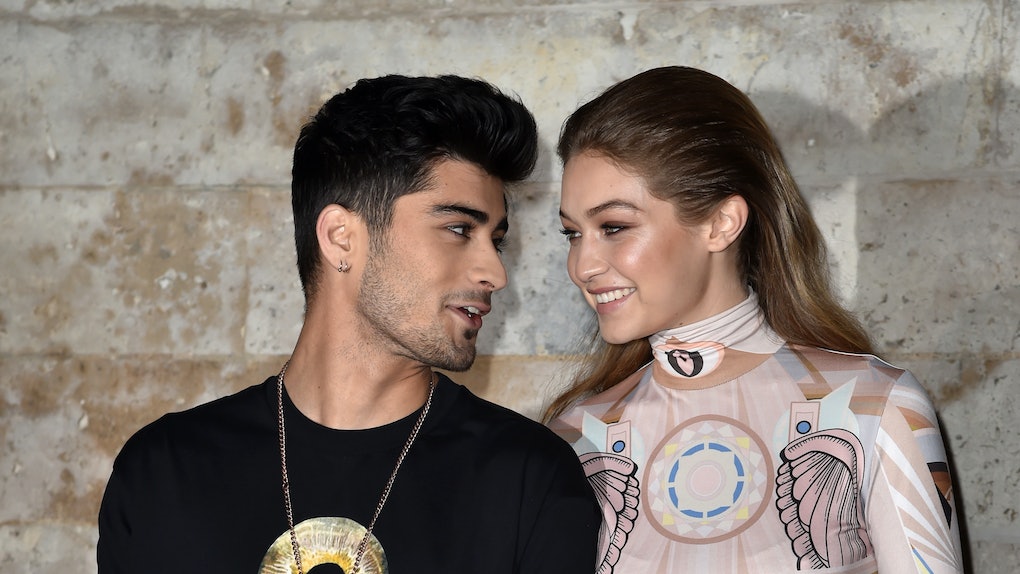 OK, y’all, is it too much to ask that Zayn Malik and Gigi Hadid get back together for good? I, for one, adore their relationship, even though it’s had its share of ups and downs over the past three years. Although they broke up in January, they clearly still care a lot about each other, judging by Zayn Malik's tweets defending Gigi Hadid on April 4. He took to Twitter to fight off recent rumors that there might be bad blood between them.

It all started when rumors broke earlier this week that Hadid was hanging out with Samuel Krost, Selena Gomez’s reported ex. The model was apparently not happy about these reports, tweeting on April 3, “If you outlets are going to continue writing bs headlines every time I’m seen with a friend of the male gender then there’s gunna be a lot of unneeded confusion.” This basically shut down any question of whether she and Krost were more than friends.

That same day, Malik took to Twitter with a series of cryptic tweets that some fans thought might be directed at Hadid. “This ain’t a place for feelings,” “And you aren’t the person you said you were,” he wrote. Naturally, the internet was full of theories — were the tweets about his ex? Was he angry at her for some reason?

Well, consider those theories gone for good, now that Malik has posted yet another series of tweets — this time much more explicit. On April 4, he wrote, “My tweet was not about @GiGiHadid so leave her the f*ck alone she is the most amazing woman I’ve ever known,” adding that his ex-girlfriend “does nothing but love and support me when lord knows I don’t deserve it.”

He is not having it with anyone who thinks he’s throwing shade at Hadid, even though they’ve been firmly broken up for a few months now. To back up a bit, the singer and supermodel first got together in November 2015, then dated for over two years before publicly announcing their breakup in March 2018. Since then, they’ve been spotted out together and on each other’s Instagram stories, basically confirming their relationship was back on — until January of this year, when a source told E! News that the couple had been “spending apart since early November.” Another source broke Zigi fans's hearts everywhere by telling Us Weekly, "they're done."

Neither has posted about the other on Instagram in awhile… but Malik did tweet “love you” at Hadid on March 2, which was honestly super confusing. Whatever the current status of their relationship, it’s evident that they’ve chosen to remain friends, and neither one appears to be too keen on all this public speculation.

Meanwhile, I’ll keep dreaming that they get back together publicly, because I feel like they’re meant for each other. I mean, Malik literally has Hadid’s eyes tattooed on his chest, for heaven’s sake! Good for him for standing up for his ex-girlfriend even amidst rumors that she’s seeing other guys, which can’t be easy for him to hear. I’m glad to see them staying friends and rising above the drama.

More like this
Dale Moss' Instagram With Clare Crawley Suggests They're Back Together
By Corinne Sullivan
Kourtney Kardashian & Travis Barker's "Pass The Phone" TikTok Is A Family Tell-All
By Abby Monteil
Are Zayn Malik & Gigi Hadid Married? Ingrid Michaelson Made A Confusing Comment
By Rachel Shatto
Stay up to date