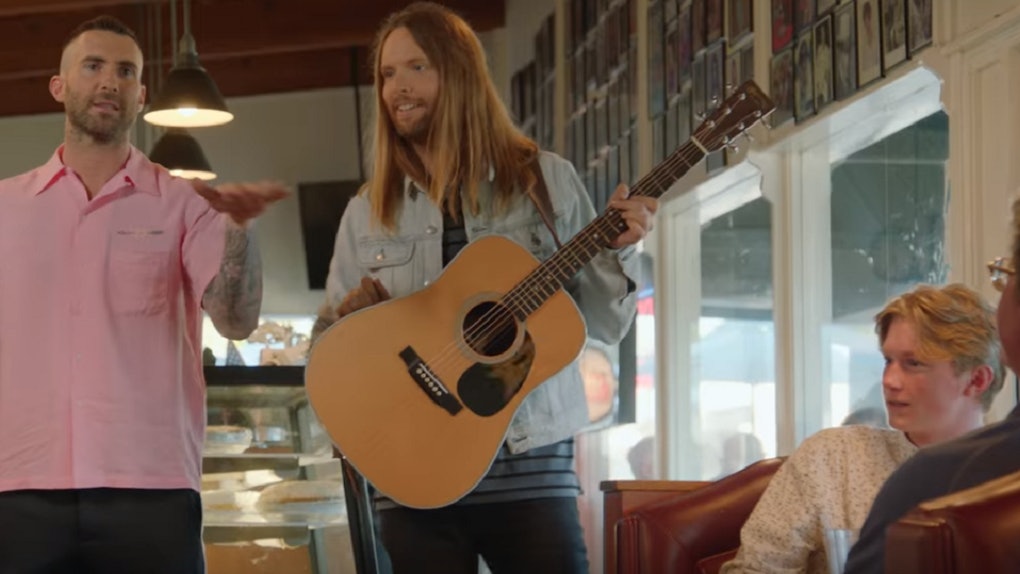 We need heartwarming, innocent entertainment nowadays more than ever before, and to keep up with the lovely TV trend of kindness, the YouTube Premium service and Maroon 5 frontman Adam Levine have the next best thing to make you smile. YouTube's Sugar trailer introduces the upcoming online series' mission of musicians rewarding deserving fans with surprise performances. Until new seasons of cry sessions like This Is Us and Queer Eye premiere, Sugar looks like the perfect solution to simultaneously making you grin and reach for the tissues.

Executive produced by Levine and inspired by the music video for Maroon 5's "Sugar," the YouTube Premium series follows Levine and other famous singers as they surprise special fans with performances and intimate conversations. The first two episodes will begin streaming on Aug. 15. In addition to Levine, the season will include appearances from Snoop Dogg, Kelly Clarkson, Bad Bunny, A$AP Ferg, Fifth Harmony, Blake Shelton, and Charlie Puth.

On the show, the artists surprise a devoted fan currently in the midst of a pivotal moment in their lives. The highlighted fans include a quadriplegic woman and a man who experienced about 30 foster homes before working with an organization that helps foster kids. The singers surprising them have released songs that the fans previously found comforting, hence the inevitable sobfest viewers should expect when they watch Sugar.

The concept of giving someone the personal concert of a lifetime first appeared in the 2015 "Sugar" music video. In it, Maroon 5 set out on a quest to crash as many weddings as possible over the course of a day in Los Angeles and perform their song, but the video later received some flak for supposedly staging some of the featured weddings. Entertainment Tonight reported that only the grooms in each scenario knew about the surprise in advance, but there were enough sketchy details tied to the video's origins that they slightly sour the band's sweet intentions.

Luckily, the TV series Sugar looks like a far more genuine endeavor. Deadline reports that the eight-episode series follows fans who gave back to their communities and are now being rewarded. The musicians then apparently crash these special events, which explains how producers lure fans into their own concerts without giving away the surprise and why those in the spotlight think they're being filmed. Does that mean this show will make me cry before the musicians even show up?

In a statement, Levine said about the series:

I'm really excited to show this interesting show/experiment filled with many different experiences and emotions; based on the concept behind our video for 'Sugar.' I'm extremely grateful and equally excited for all who participated on both sides of the camera.

When he isn't working on Sugar behind the camera, Levine has his spot as a coach on Season 15 of The Voice to prepare for. Seeing as Shelton and Clarkson, his coaching co-stars, also appear on Sugar, we can probably look toward past Voice coaches for insight on what artists may appear on future Sugar seasons. I would definitely sob from an episode's beginning to end if Miley Cyrus surprised someone with "The Climb," TBH.