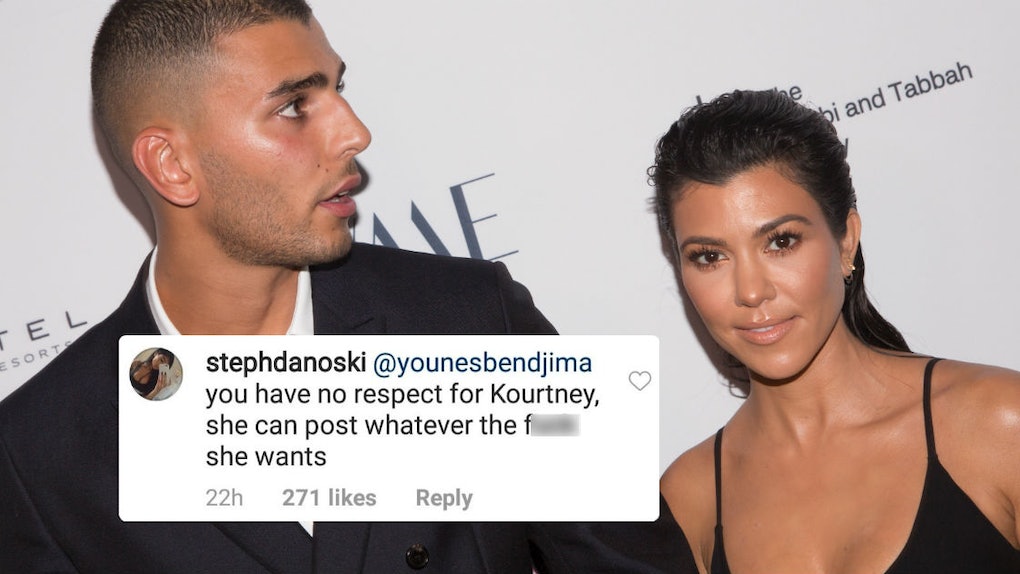 The internet is such a bizarre place sometimes. Like, remember last week when Younes Bendjima got dragged on social media for his "Thats what you need to show to get likes?" comment on his girlfriend Kourtney Kardashian's thong pic? TBH, I thought the whole thing was seriously blown out of proportion. Like, when I first saw his remark on Kourt's Insta, I totally wrote it off as silly couple's banter. Sorry, but I did. Anyway, now the 25-year-old model is trolling himself for the whole ordeal. Younes Bendjima's new comment on Kourtney Kardashian's Instagram feed yesterday references his last shady comment and OMG dude, why are you bringing the whole thing back up again after all the drama had finally died down? It's all so... Kanye of you.

ICYMI, on July 19, Kardashian shared a benign (read: boring) sponsored post for a gray weighted blanket from a company called BlanQuil, which — I'm not gonna lie — I kind of want to buy now. In the pic, the Keeping Up With The Kardashians star is sprawled on her bed (I mean, at least I think it's her bed) in a long-sleeved, cream-colored top without any pants. Even so, the whole thing is strictly PG. And the real story here, guys, is the fact that Bendjima rolled up to the comment section to share his two cents on this post, too!

"Hmmm well... ok for this one," he wrote, then tacked on a tongue-sticking-out emoji for good measure.

Now, on the one hand, I love Bendjima here for attempting to take ownership of the whole messy situation by showing up to joke about it. But on the other hand... his humor kind of missed the mark (again!) and went right over the heads of many of Kardashian's followers, who were left with a bad taste over the idea of anyone's boyfriend needing to approve their girlfriend's posts before she shares them. I mean, just check out that eye roll emoji above from Kourt's bestie Simon Huck.

Bendjima actually responded back to Huck's comment, writing, "Let me just play around fam." And while some of Kardashian's fans took it to mean the whole thing was supposed to be a joke, others clearly did not.

"You don't own her just a reminder," wrote one commenter.

"No one cares about your approval," added another.

And from a third: "Don't think she needs your permission but OK."

Bottom line: It was probably not a great idea for Bendjima to try and joke around on social media about a comment that he swears he was just joking around by making in the first place. Coming across as all judge-y and controlling is never a good look. So maybe some kind of statement about not shaming women for the pics they post online would have been a better way to go? Just a thought.

Anyway, I think it's pretty clear that the winner in all this is BlanQuil. Well, and me, for just clicking over and buying one while Kardashian's 20 percent off discount code still works.