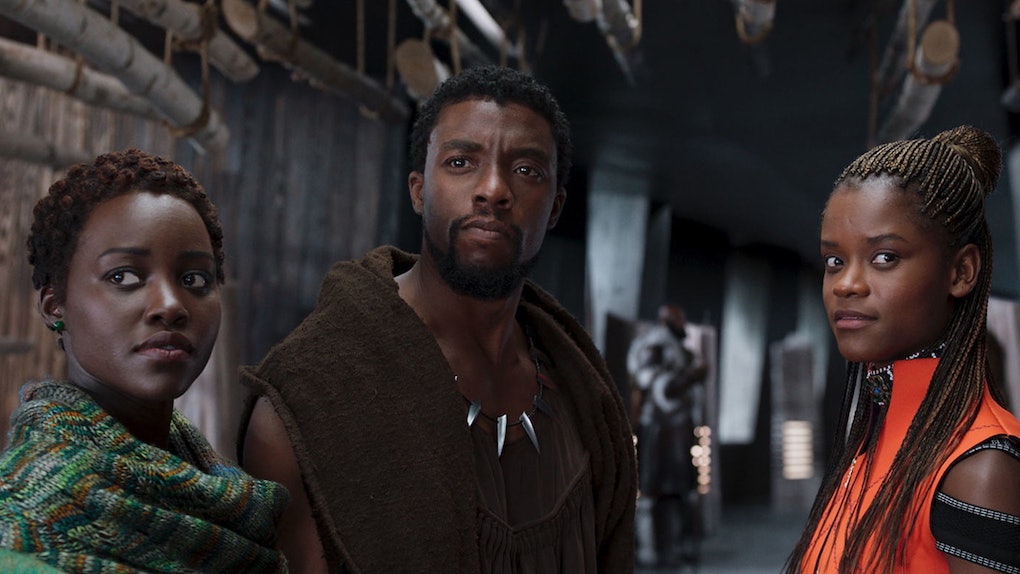 Black Panther may have come out a year ago, but the groundbreaking superhero movie is bigger and more beloved than ever right now. The Marvel movie is making history this awards season as one of the only superhero movies to ever receive numerous major nominations at the big awards shows, and now fans have one last chance to see it in theaters before the Oscars. Disney has announced that you can see Black Panther in theaters for free over the next several days in celebration of the beginning of Black History Month. So, if you were not able to watch Black Panther in theaters when it was first released, or you just want to see it in theaters again, then get ready to snag a free ticket.

After the Black Panther cast took home the best cast in a motion picture trophy at the SAG Awards this weekend, Disney announced that the comic book adaptation would be returning to theaters and screen for free for the first week in February. Fans can see Black Panther for free at any of the 250 participating AMC theaters from Feb. 1 to Feb. 7. The week was chosen to celebrate the beginning of Black History Month, and it is also an opportune time for fans to get the full Black Panther experience before the Oscars at the end of the month.

Each participating AMC theater will have two free showings of Black Panther per day. Disney has also pledged a $1.5 million grant to support the United Negro College Fund (UNCF).

Of course, homebody fans also have the option to watch Black Panther on Netflix, since it was made available to stream on the platform a couple months ago. But seeing it in the theaters definitely adds so much to the experience, and since it will be free this week, there is nothing standing in the way of re-entering Wakanda.

Black Panther was not only one of the most massive box office smashes of 2018, but it also garnered unprecedented critical acclaim within the blockbuster superhero genre, a subset of film that is widely dismissed by serious critics and major awards. The movie was nominated three times at the Golden Globes, won both of the SAG Awards it was nominated for, and won three of the 12 Critics' Choice Awards it was up for. Most impressively of all, Black Panther is nominated for seven Academy Awards this year, including the highly coveted Best Picture trophy. The Oscars will not occur until Sunday, Feb. 24, so fans have plenty of time to check out a free screening before tuning in to see if Wakanda can take home the gold.

As is expected of these giant superhero franchise movies, a Black Panther sequel is already in the works as well. Work on the upcoming sequel has only just begun, but it sounds like Michael B. Jordan may actually return as Killmonger in the new movie, which will come as a shock to fans who saw Black Panther. Unfortunately, we will have to wait a while for the sequel to hit screens. Until then, free screenings of Black Panther kick off at AMC theaters on Friday, Feb. 1.