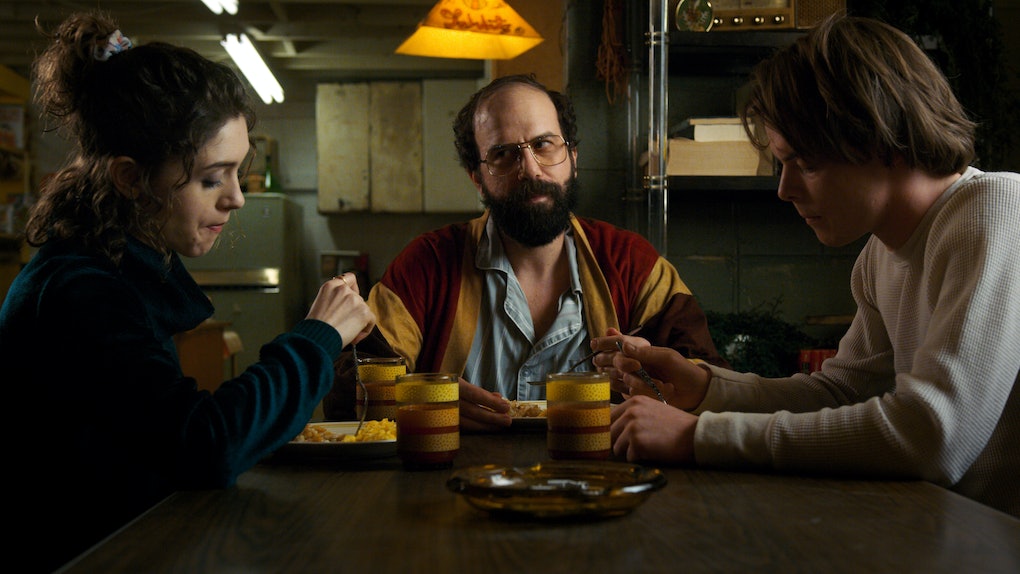 This post contains spoilers for Season 3 of Stranger Things. Conspiracy theorist Murray Bauman served as Stranger Things' unlikely Cupid in Season 2 when he teased Jonathan and Nancy into exploring the chemistry between them, but in Season 3, Murray did far more than matchmaking. After translating Dr. Alexei's Russian and accompanying Hopper and Joyce to the mall's underground hideout, Murray disappeared, but a real-life Easter egg might explain what comes next for the adults of Hawkins. You can call Murray's Stranger Things 3 phone number for an update about Joyce, so it looks like the pair are preparing for their own investigation in a possible Season 4.

First appearing when Nancy (Natalia Dyer) and Jonathan (Charlie Heaton) visited him for help in spreading the truth about Barb's (Shannon Purser) death, Murray (Brett Gelman) presumably spent the time between Seasons 2 and 3 speculating in his bunker. After Hopper (David Harbour) and Joyce (Winona Ryder) kidnapped Russian scientist Alexei (Alec Utgoff), the next step was for them to visit Murray for further probing of Alexei. Murray gamely translated Alexei's knowledge about the machine keeping the gate to the Upside Down open, leading to Hopper and Joyce's realization that the kids were in danger.

What with monsters on the loose, Hopper called the phone number Dr. Owens (Paul Reiser) supplied, connecting him with the "Philadelphia Public Library." Hopper asked for government backup in Hawkins and gave the other man Murray's number, which actually included an Indiana area code. Since the season's July 4 launch on Netflix, fans have discovered that dialing the number — 618-625-8313 — will connect one to Murray's answering machine. Anyone born in the last 20 years or so is probably a little unfamiliar with this concept, but Murray's current answering machine message is essential listening for Stranger Things fans.

The message, which you can also hear on YouTube, says:

Hi. You have reached the residence of Murray Bauman. Mom, if this is you, please hang up and call me between the hours of five and six p.m. as previously discussed. Okay? And if this is Joyce, Joyce, thank you for calling. I've been trying to reach you. I have an update. It's about — well, it's probably best if we speak in person, it's not good or bad but it's something. And if this is anyone but my mother or Joyce, well, you think you're real clever getting my number don't you? Well, here's some breaking news for you. You're not clever. You're not special. You are simply one of the many, many nimwits to call here, and the closest you'll ever get to me is this pre-recorded message. So, at the beep, do me a favor. Hang up and never call here again. You are a parasite. Thank you, and good day.

The end of Season 3 was unclear about what happened to Murray in the aftermath of the Russians' destroyed machine, but this message fuels many theories. Despite Joyce moving away from Hawkins in the season finale, she may have kept in touch with Murray, who might be investigating the circumstances of Hopper's slightly inconclusive death. But on the other hand, Murray mentions he's been trying to reach Joyce, suggesting that she moved without telling him and he keeps calling the Byers family's old number.

While Joyce may have given up on the possibility of Hopper being alive, Murray really has nothing better to do than keep tabs on the Upside Down. But is he just shouting into the void when he says he has an update for Joyce? Most importantly, Murray's news isn't necessarily groundbreaking, but he says that "it's something." Fans have crafted worthy theories explaining what Season 4 may reveal about Hopper, and if they're as synced to the creative team's thoughts as they hope, they may have correctly assumed that Murray believes this closing of the gate wasn't as final as it seems.

Audiences will have to wait and see if this answering machine clue pans out in a still unconfirmed Season 4. Season 3 of Stranger Things is streaming on Netflix.