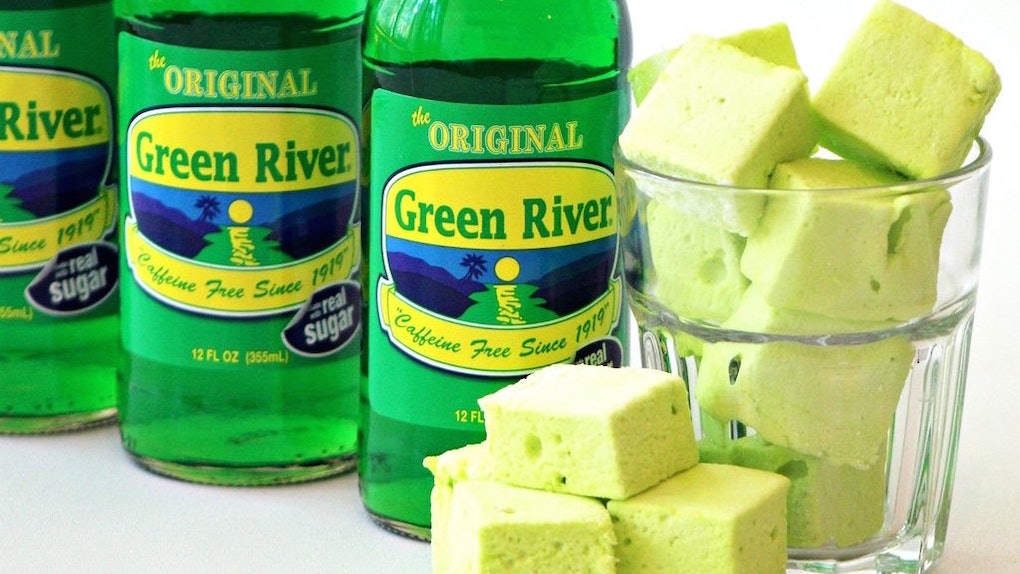 There are so many fun ways to celebrate St. Patrick's day, whether you find yourself craving a classic corned beef and cabbage dinner, if would rather party it up at the New York City parade, or — of course — if it's more your style to get in on a rowdy-as-heck bar crawl. But if you're seeking out a super sweet way to celebrate this season, make sure to check out XO Marshmallow's Green River Soda flavor for St. Patrick's Day 2019. It'll actually make you feel like you're partying it up alongside the green Chicago river.

Aside from trekking out to Dublin, Ireland during the lucky mid-March holiday, it's at the very top of my St. Patrick's Day bucket list to witness Chicago's infamous green river, in the flesh. If you're native to this major hub in the Midwest, you've probably caught a glimpse of the river that's turned neon green thanks to some orange powdered dye mixed with water, per Mental Floss, to honor the famous mid-March holiday. Chi-town natives and tourists far and wide surround the river on the day of the city's St. Patrick's Day Parade, likely following up the photo op by drinking a green beer, and — of course — the Chicago staple, Green River soda, which sports a hue similar to the festive body of water.

OK for real, though, how cute are they? Even though you can only snag these marshmallows throughout the month of March, they're totally worth it for a rad St. Patrick's Day hoedown. If you can't make it to Chicago in time for the city's St. Patrick's Day celebrations this year, it'll totally make you feel like you're sipping the famous drink right next to the river itself.

Once you've had your fill of 'mallows, definitely make a point to check out Tim Hortons' Clover Doughnuts. Starting on Wednesday, March 6, the North American fast food chain will be selling four-packs of the delectable pastries, and they will be available through March 17. Like the marshmallows, they, too, are a festive bright green hue, they're clover-shaped, and if you ask me, they would be an excellent complement to that hefty glass of green beer I see in your future.

If you ask me (aka your go-to St. Patrick's Day expert), there is definitely no "wrong way" to celebrate the mid-March Irish holiday. While a trip to Chicago's green river would be undeniably sweet, these Green River Soda-inspired 'mallows are like... 50 times sweeter. Pairing them with Tim Horton's Clover Doughnuts would undoubtedly make for a deliciously sugary dessert, so if you need me, I'll be in a dessert-induced coma.