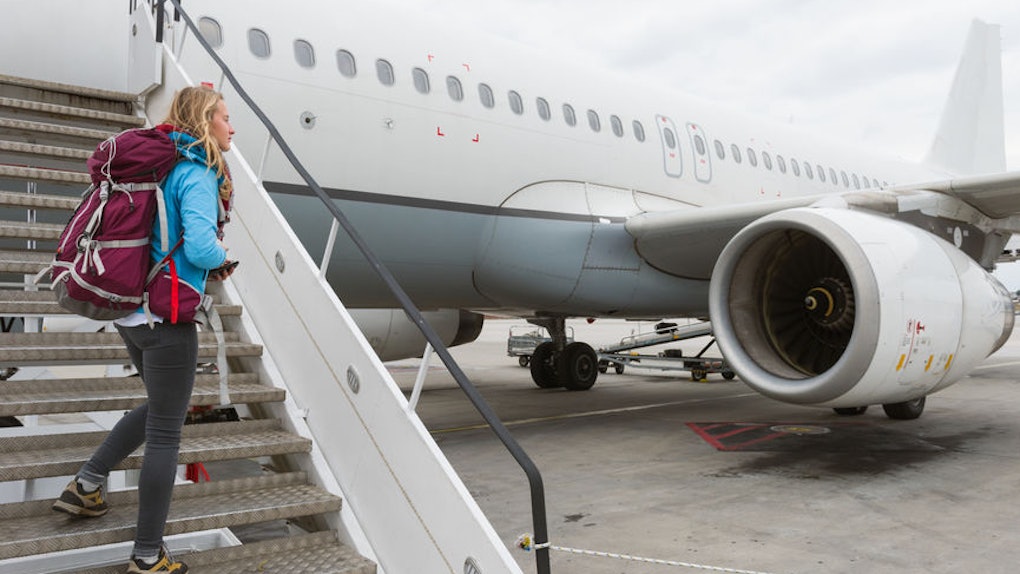 WOW Air is honoring International Women's Day in a special way, and free plane tickets are involved. The airline isn't just giving them away willy-nilly, though. Instead, it's holding a contest that lets everyone nominate the most inspiring women in their lives to win free flights. That's a pretty cool way to celebrate the holiday, don't you think? It you're hoping to partake in WOW Air's International Women's Day 2019 flight contest, think about a special woman in your life and read on for details.

In case you missed it, WOW Air's contest initially began on Feb. 26, but people can enter until March 8 (phew). Based off of the airline's contest webpage, entering should be simple. First and foremost, you'll need to think about a woman in your life that you find inspiring (hey, mom). Think long and hard, because you'll have to share a story about her on social media. When you're ready to share, the contest asks that you post your story onto Facebook or Instagram. Don't forget to mention @wowair and use the hashtag #wowwoman while you're posting, though. If you forget, the airline might have have trouble finding your submission, and that would be a total bummer.

Again, you have until March 8 to enter — so start thinking.

After you enter WOW Air's International Women's Day contest, you won't have to wait very long to see who won. In fact, WOW Air will repost "the most inspiring stories" that've been submitted on March 8. (That's so soon, guys!) Then, the airline will give the winning women two plane tickets each to a WOW Air destination of their choice. In other words, they'll get free flights for being the inspiring, empowering, and awesome ladies that they are.

In case you're wondering, WOW Air has over 25 international destinations listed on its website — and they all seem perfect for vacationing. In fact, if I won the contest, I don't even know which one I'd choose. Some cities included are Barcelona, Berlin, Milan, Reykjavik, and so many more. By visiting the WOW Air's destinations page and clicking on a particular city, you'll be able to learn more about it and plan a vacay.

I don't know about you, but I'm so down for a trip to Iceland. Seeing the Northern Lights is definitely on my bucket list.

If you don't end up winning WOW Air's International Women's Day contest (or if the woman you nominate doesn't win), don't fret. The airline hosts sales from time to time that'll send you across the globe on the cheap, such as this President's Day Sale that the company hosted in February 2019. The sale featured $45 one-way flights to Iceland, which is incredibly cheap. (TBH, I've spent more than that on brunch in the past.) With that being said, keep yourself up to date on WOW Air's sales by checking its website every so often.

Before you wait around for the next sale, go ahead and enter the airline's International Women's Day contest. I'm sure the woman that you nominate will be thankful, whether she wins or not.