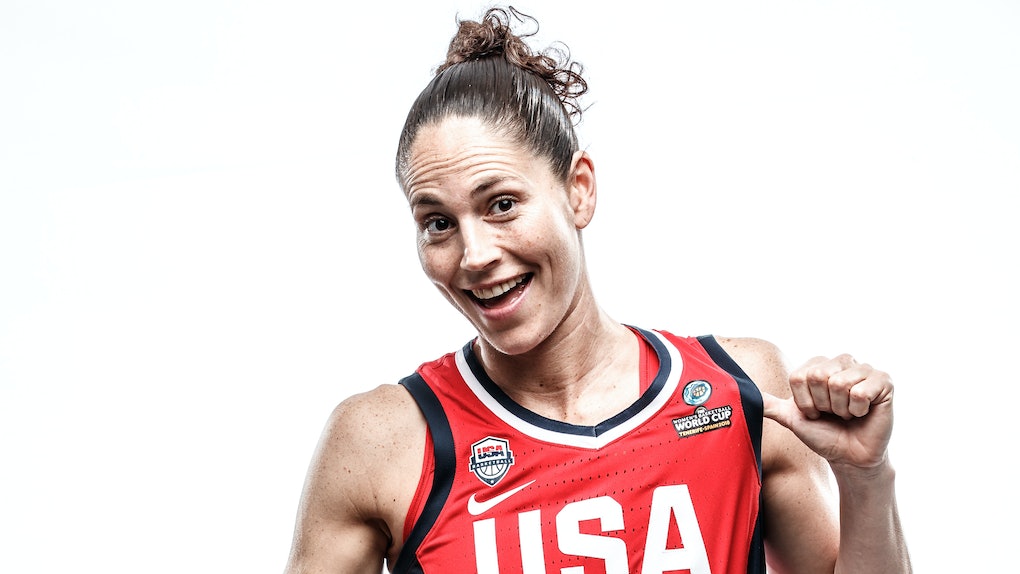 Even after a full workout, basketball superstar Sue Bird looks like she could bolt right back out on the court — almost like she’s constantly operating with a steady undercurrent of competitive energy. That readiness is what makes Bird one of the top players in the Women’s National Basketball Association (WNBA), where she’s a point guard with the Seattle Storm and an 11-time WNBA All-Star. Despite her high profile and 18 years of experience, she takes nothing for granted. Case in point: Bird hopes to compete for her fifth Olympic gold medal in 2021 as part of the Women’s National Basketball Team, and she’s still practicing just as hard as when she was first trying to make the Olympic team in 2004.

When Bird talks about her profession, she’s quick to clarify it’s more than a career. “[Basketball]’s not just my job, but it’s really a lifestyle. It’s like part of my identity,” she says. During the WNBA season, which runs from May to September, Bird plays 36 regular season games, or one every two to three days. When her team goes all the way to the WNBA playoffs, they add on two elimination games before a best-of-five semifinal and a best-of-five WNBA Final. Bird is more than familiar with the process — she’s won three WNBA championships with the Storm in 2004, 2010, and 2018. The impressive resume is the result of Bird’s dedication to her training. She says, “You’re just constantly trying to stay in shape, constantly trying to be in basketball shape.”

My dreams were always pretty big.

The goal with Bird’s training is to always be “fresh” and challenging. “I have a performance coach, and I joke that I talk to her, like, literally more than I talk to Megan [Rapinoe], my girlfriend,” Bird laughs. “Every day, we’re in contact, and she gives me what I’m gonna do for the day.” Her daily routine is ever-changing, ranging from a pool workout to a lifting session to a cycling class. Game day prep is a little different. On those days, after fueling up with some breakfast, Bird heads to the team’s shootaround, an hour-long practice where the players get up some shots and go over scouting reports. Then she goes back home to rest up for the big game, which means squeezing in a nap, eating a pre-game meal, and heading to the arena two hours before game time.

Bird’s über-personalized routine earns her some gentle ribbing from her dad, who jokingly refers to her life as an “extended kindergarten.” Bird laughs as she explains, “Ya know, because I take a nap, and I have someone making sure I’m eating well.” The All-Star says she welcomes the razzing, though — since her life revolves around the sport, she appreciates “a healthy dose of reality” from her supportive family to help keep her grounded.

When she’s not competing with the Storm, Bird plays with the USA Basketball Women’s National Team, which she calls her childhood dream. “Oh, to be the best — as a women’s basketball player — means you are an Olympian.” Bird admits, “My dreams were always pretty big.”

We’re trying to make this league, and make our national team, popular together.

As of 2020, Bird's won four Olympic gold medals — 2004, 2008, 2012, and 2016 — as a part of that team. She hopes to compete again when Tokyo hosts the Summer Games in 2021, after a year’s delay due to the coronavirus pandemic. When the news of the postponement broke on March 24, Bird says, “I was actually a bit relieved.” She was nervous about the possibility of the Olympics being canceled altogether, but now that they’re on the books for July 2021, Bird’s ready for a chance to rejoin her teammates after a knee surgery that knocked her out of the 2019 WNBA season. “My mindset for the past few years has always been to train like I’m training for the Olympics, and when the time comes, if I’m healthy [and] playing at a high level, and I’m asked to [represent] my country again, I will 100% say yes.”

Bird didn't have the WNBA to look up to as a kid, but when it was established in 1997, her basketball dreams grew to include playing in the new league. She played in summer leagues and focused on choosing a university that could really prepare her for a sports career. In 1998, Bird enrolled at the University of Connecticut (UConn), where she won two NCAA women’s basketball championships and was the first overall pick of the 2002 WNBA draft. Nearly two decades on, she’s one of the most enduring stars of the league.

With the WNBA still relatively new, Bird says the players see each other as allies united in the goal of pushing the women’s league forward. “It can get dicey out there. There have been fights in our league. There have been Twitter wars, [there’s] been all kinds of stuff,” Bird explains. “But, we're trying to build this together. We’re trying to make this league, and make our national team, popular together.”

That includes demanding fair compensation. Bird says it’s been a long road for players to address these issues, because early on in the WNBA, as she puts it, “We were kinda, like, happy to be there.” It was after realizing the discrepancies between the men’s and women’s leagues that players took a closer look.

Players’ salaries are heavily dependent on the total revenue of the leagues, which comes from sources like TV deals, corporate sponsorships, and ticket sales. During the 2017-2018 season, the NBA brought in $8 billion, while the WNBA netted about $60 million. NBA players are guaranteed 53% of their league’s annual revenue, thanks to the NBA’s collective bargaining agreement, while WNBA players only get about 20% of their league’s revenue. The WNBA and the WNBA Players Association agreed to a new collective bargaining deal in January 2020, which includes an equal revenue split between the teams and players.

Bird understands it’s not all or nothing. “I’m not sitting here saying, ‘Pay me the same as the NBA players.’ No, that’s not how it works,” she says. Although there are differences between the leagues, like the NBA’s 30 teams compared to the WNBA’s 12, she says there’s room to bridge the revenue gap. “We deserve to have equal marketing, and we deserve to have equal promotion,” Bird says.

The players also face a long-held stereotype that women’s sports aren’t as exciting as their male counterparts, an attitude Bird attributes to ignorance. “I would say of all the people I’ve come across that would say that to my face — which is not many — I’ll [ask], ‘Have you been to a game?’ They haven’t,” she explains.

Bird is just as vocal about other issues. In 2019, Bird, who came out publicly in 2017, famously defended her girlfriend during a feud with President Donald Trump. Rapinoe, the co-captain of the U.S. Women’s National Soccer Team (USWNT), said in a June 2019 interview she wouldn’t go to “the f*cking White House” if the USWNT won the 2019 World Cup. Trump later tweeted Rapinoe “should never disrespect our country, the White House or our flag.” In turn, Bird clapped back with a July 2019 open letter in The Players’ Tribune titled, “So the President F*cking Hates My Girlfriend,” in which she criticized Trump and said she was proud of how Rapinoe became a stronger version of herself in the midst of Trump publicly criticizing her. “I think in trying to help others, Megan has cemented who she is,” she wrote.

Bird says she’s always willing to speak out on “basic human right-type” issues. “If I see something happening that’s racist, I’m gonna say something,” she says. “Obviously as someone who is gay, if I see there being any kind of homophobia, I’m gonna say something.” She praises the way WNBA players respect each other's varied backgrounds, including differences in race, sexual orientation, or religion. “Sports just doesn’t see that stuff,” she says. “So when I see it happening outside of that world, I feel the need — and I feel obligated — to say something.”

That kind of easy acceptance and inclusion is one of the valuable lessons young athletes can get out of sports. “All the stuff we learn from being involved in sports at a young age and throughout, you can take that with you into the classroom … and into your life,” she says. But whether you’re an aspiring superstar or just an amateur playing casually, Bird emphasizes the importance of enjoying whatever sport you play. She says, “It’s a sport. You should be having fun."

More like this
Skateboarder Brighton Zeuner Never Thought She Could End Up At The Olympics
By Rhyma Castillo
Angry Orchard's Peach Mango & Strawberry Hard Cider Flavors Are Twists On A Classic
By Daffany Chan
Here's How To Enter Hotels.com's Tax Write-Off Vacation Giveaway For A Chance At $2,700
By Lara Walsh
Stay up to date