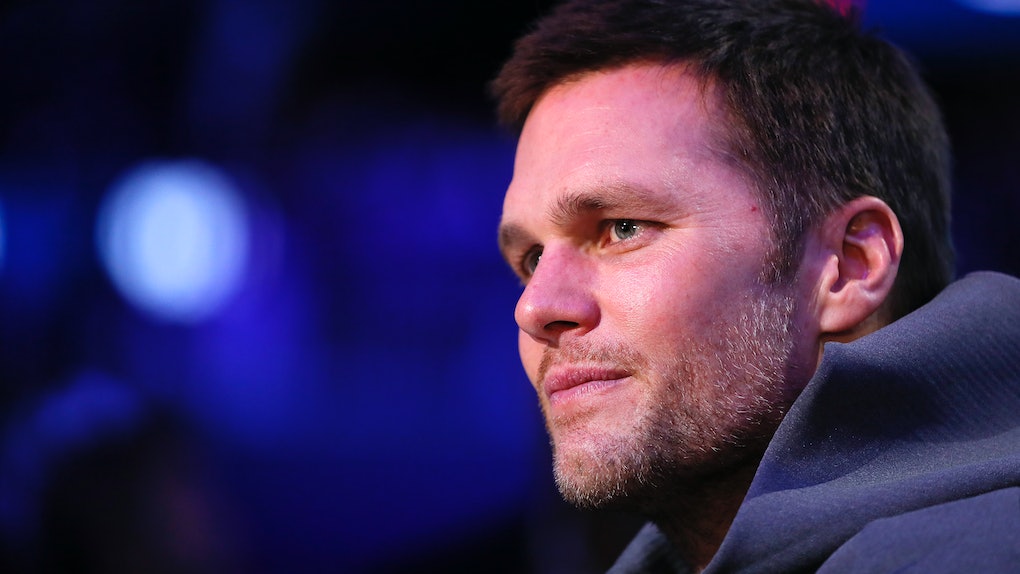 Will Tom Brady Retire After The 2019 Super Bowl? It's A Valid Question

Legends never die, but they do eventually retire. A professional athlete's time on the field often reaches its end in a person's late 30s or early 40s, but in football, a player's career can be even shorter due to the heavy toll the sport plays on one's body. Regardless of career length, we all know and love those athletes who stick with the same team throughout their careers, but when it comes to longtime New England Patriot Tom Brady, fans are wondering if he'll leave the game for good soon. Will Tom Brady retire after the 2019 Super Bowl? The quarterback has insisted that he won't hang up his helmet after playing in this season's grand finale.

Playing with the New England Patriots since the 2000 football season, 41-year-old Brady has definitely shifted into one of those players who is just as much of a cultural figure as he is an athlete. Married to model Gisele Bündchen since 2009, he has two children with Bündchen and one from a previous relationship with actress Bridget Moynahan. Beloved by New Englanders and often viewed more contemptuously by anyone else, Brady was the center of national attention during the Deflategate scandal of 2015-16. This investigation of the Patriots, particularly Brady, sought to determine whether the team deflated footballs they used during the 2014-15 AFC Championship game against the Indianapolis Colts. After reports deemed that the Patriots interfering with the balls was "more probable than not," the QB was ultimately banned for four games due to not properly cooperating with the investigation. Given the Patriots' already shady reputation, sports fans are still a little sour about the controversy, but Brady's legacy in football remains undeniable.

Given his age and longevity in the sport, questions about retirement are unavoidable, but Brady has seemingly put them to rest through a recent interview with ESPN. Speaking to the network's Jeff Darlington, he said, "There's 0 [percent chance I'll retire after the Super Bowl]. I've said that for a long time. I feel like I'm asked that a lot and I feel like I repeat the same answer, but no one wants to believe me."

In the same interview, he hinted that he hopes to be nowhere near retirement, saying:

I’ve set a goal for myself at 45. Like I’ve said before, it’s very hard to make it that far. I know how hard it was this year and the commitment it takes, and hopefully, I’ve learned from some of the things that happened this year to be better next year. But every year is tough.

As Bleacher Report points out, Brady's performance throughout the 2018 season was "spotty," but it looks like he's committed to staying in shape to keep playing for a few more years. He's also dedicated to playing in the later half of 2019, telling ESPN, "I absolutely believe I will [return in 2019]... I have goals to play not only next year, but beyond that. I'm going to try to do as best I possibly can."

This year marks Brady's ninth time playing in the Super Bowl, and in his position, he faces 24-year-old Los Angeles Rams quarterback Jared Goff, who's the same age Brady was during the Patriots' victorious performance at the 2002 Super Bowl. So, yes, he's getting to the point of playing against men he could have fathered, but Brady is definitely dedicated to living out his career to the fullest. We'll have to wait and see if his thoughts on retirement change after the outcome of the Super Bowl.

More like this
Are Olivia Lux & Utica Dating After 'Drag Race'? Olivia Gave An Update
By Dylan Kickham
Colton Underwood Is Reportedly Making A Netflix Show After Coming Out As Gay
By Dylan Kickham
Prince Philip, The Duke of Edinburgh, Has Died At The Age Of 99
By Noelle Devoe
Stay up to date