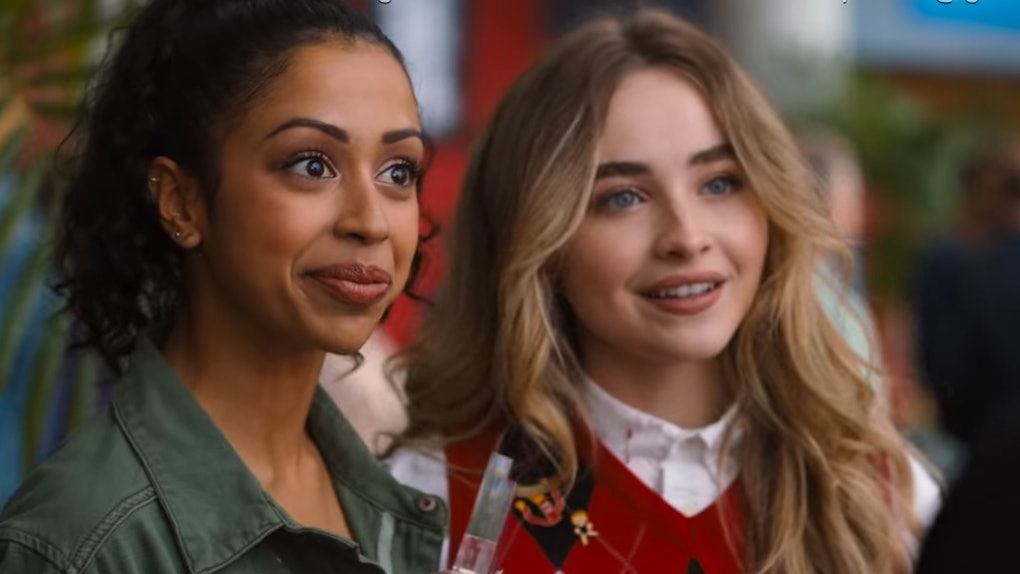 Will There Be A 'Work It 2'? A Sequel Could Show Quinn & Jas In New York

If you already watched Work It – which dropped on Netflix on Aug. 7 — you already know the film's lead Quinn (Sabrina Carpenter) might not have the future she expected. But if the dance flick provide anything, it's that the unexpected might be a good thing. After uncovering a passion for dance, a helpful college admissions counselor seemed to suggest Quinn head to NYU instead of Duke like she planned, but of course, the film ended in a cliffhanger, so fans didn't get to see how her college decision panned out. While there's no official word yet if there will be a Work It 2, fans are craving a sequel, because seeing Quinn and her BFF Jas (Liza Koshy) thrive in New York would be so fun to watch.

Warning: Spoilers for Work It ahead. At the start of the film, high school senior Quinn had her sights set on Duke University. It was the school her dad attended before he died, and the place her mother agreed was the perfect post-grad spot for her. To make herself the best candidate for school, Quinn boosted her resume by signing up for a bunch of extracurriculars, including being the head of the A/V club, volunteering at a nursing home, playing the cello, and so much more.

However, this list of after-school activities didn't seem to impress Duke college admissions counselor Veronica Ramirez (Michelle Buteau), who pressed Quinn to find a passion and think outside the box during her admissions interview. In a moment of panic while trying to please Ms. Ramirez, Quinn claimed she was on her high school's award-winning dance team, the Thunderbirds.

Realizing Quinn was more than a bit clumsy, the Thunderbirds wouldn't adopt her on their squad. So, Quinn decided to start her own dance team, and — with the help of her dancer bestie Jas, a social media search to find dancers, and an amazing choreographer — her team beat the Thunderbirds at the Work It dance competition.

Along the way, Quinn found a passion for dance. She even impressed Ramirez, who got a new job at NYU and thought Quinn might prefer that school over Duke anyway.

Quinn wasn't the only dancer on the squad to leave a mark on a college admissions counselor. Jas was also approached by her dream dance school in New York after they won the competition. The film's ending basically perfectly set up a sequel in which the pals could live college life together, dancing in the Big Apple.

Even though Quinn hadn't officially heard back from Duke by the end of the film, it's kind of hard to imagine her not taking the opportunity to attend college in the same city as Jas. There's no word yet on whether a follow up movie will happen, but here's to hoping a Work It sequel is on the way.

Work It is on Netflix now.