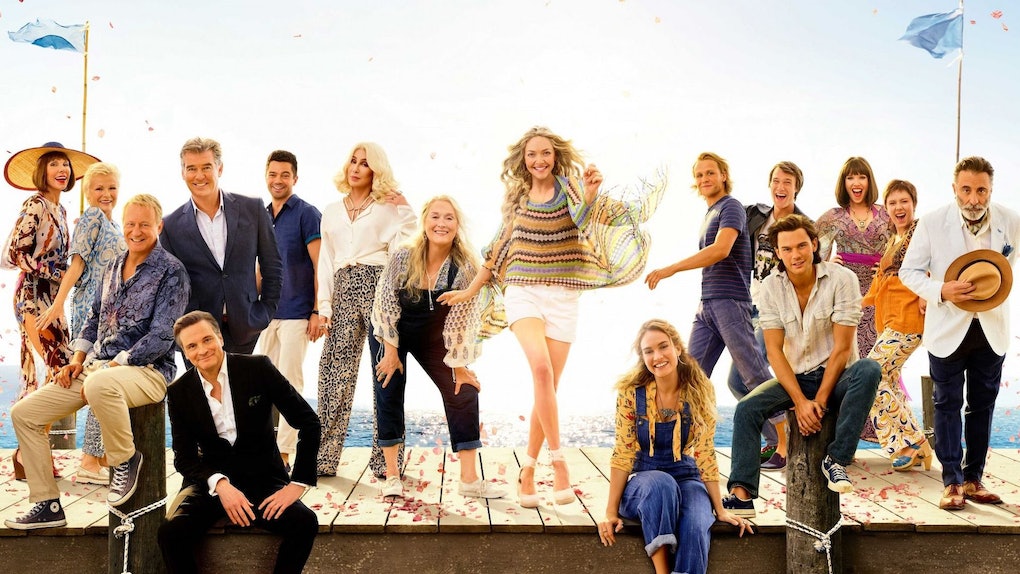 Will There Be A 'Mamma Mia 3'? Here Are The Chances They "Go Again"

The original Mamma Mia! movie was released 10 years ago in 2008. Based on the Broadway production, Mamma Mia is what is known as a "jukebox musical," aka a Broadway show where all the songs are ones audiences might find on a jukebox, as opposed to original works. Both stage show and movie were big box office bangers, though critics were less enthused. Now, a decade later, a sequel has finally happened. The film with the amazingly obvious title Mamma Mia: Here We Go Again, opens this weekend in the U.S. Will there be a Mamma Mia 3? How many ABBA songs are there to make musicals out of anyway?

The original film, back in 2008, focused on Sophie, played by Amanda Seyfried, and her mother Donna, played by Meryl Streep. Sophie, who was about to be married, invited the three men who could potentially be her father to the wedding, Sam (Pierce Brosnan), Bill (Stellan Skarsgård) and Harry (Colin Firth.)

She did this in hopes of being able to figure out which man is her dad, merely by spending time in their presence. (Because, I dunno, paternity tests are expensive or something. It's a musical, it doesn't have to make sense.) In the end, everyone decides not knowing is the better option, though Meryl Streep does marry Pierce Brosnan, I assume because she is either a major 1990-era James Bond fan or she never saw Colin Firth in Pride and Prejudice. Maybe both.

But if there's going to be a Mamma Mia 3, they're going to need to get creative. Mamma Mia 2 is not just a sequel to the first film, it's also a prequel, pulling double duty while dampening the possibility of a third film in the process. The film is set five years after the events of the first movie, with Sophie pregnant with her first child, and worrying about the health of her marriage. Her three dads all come back to visit to lend moral support when Donna disappears and could possibly be dead.

The film also introduces more star power by adding in Cher as Sophie's grandmother, Donna's mother, Ruby. Because if a musical film can add Cher, it should always do so, even if she's only three years older than Streep.

But the movie also spends a great deal of time flashing back to the events of 1979, when a younger Donna, played by Lily James, dates younger versions of Sam (Jeremy Irvine), Bill (Josh Dylan), and Harry (Hugh Skinner), winding up pregnant with baby Sophie.

The new movie includes no less than 18 ABBA musical numbers, some of which were featured in the first film. (There were 24 ABBA numbers in the first movie alone.) Most of the singing this time is done by the 1979 era cast, which makes more sense, considering ABBA was far more popular in that era than this. (It also keeps Pierce Brosnan from singing, which is probably for the best.)

If a Mamma Mia 3 follows, fans hope this time it won't take ten years between films. Mamma Mia: Here We Go Again opens in theaters around the U.S. on Friday, July 20, 2018.