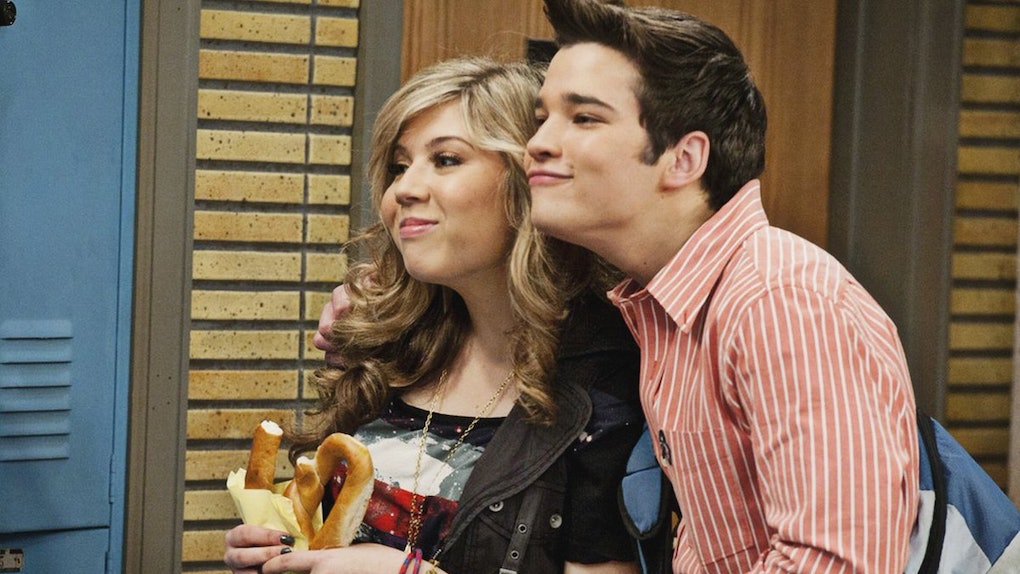 The era of 2000s pop culture gave way to countless ship wars. There was Team Edward versus Team Jacob on the Twilight front, Team Peeta versus Team Gale for The Hunger Games fans, and who can forget Ron and Hermione versus Harry and Hermione from Harry Potter? It wasn't just YA book series-turned-movie franchises that had fan-fave couples, either. Even children's sitcoms got in on the fun. When it came to Nickelodeon's hit show iCarly, it was all about Team Seddie versus Team Creddie. Now, with news that one key member of this longstanding ship war, Sam (Jennette McCurdy), won't be in the upcoming iCarly reboot, fans have one question: Will the iCarly reboot address Sam and Freddie's relationship?

When iCarly premiered in 2007, romance wasn't a factor in the dynamic of the show's main trio. While Freddie Benson (Nathan Kress) had a hopeless crush on Miranda Cosgrove's Carly Shay throughout the first few seasons, it was more of a running joke than a genuine storyline, with Carly insisting she only saw him as a friend. There was a faction of viewers (aka Creddie shippers) who rooted for Freddie's unrequited feelings to be reciprocated, but there was also a passionate group who wanted Freddie to start dating his sassy, combative frenemy, Sam Puckett. Freddie eventually grew out of his crush on Carly, making way for Freddie and Sam to finally acknowledge what Seddie shippers knew all along: they liked each other (duh). The pair kissed in Season 4, Episode 10, a "special" episode called "iOMG," and they went on to have an on-and-off relationship that ended ambiguously in the Season 5 series finale.

In a world without an iCarly reboot, Seddie fans could imagine a fictional future in which Seddie reunited and ended up married with kids. So when Paramount+ announced iCarly was getting a reboot with Cosgrove and Kress returning as Carly and Freddie, but no McCurdy as Sam, Seddie shippers everywhere freaked out. How can Seddie have reunited and gotten married (like they dreamed) if Sam isn't in the picture anymore? Would Creddie shippers finally have their dreams of Carly and Freddie getting together realized through the reboot?

On Dec. 24, 2020, one of the showrunners behind the reboot addressed all the speculation and confusion surrounding Seddie and Creddie. Unfortunately for everyone, it doesn't look like either ship will live on through the reboot.

"I know there are Seddies and Creddies," writer and director Jay Korgen tweeted, chiming in on a thread of Creddie shippers insisting their ship sail in the reboot. "But you don't know about Carly's new loves. Freddie's marriage. And Sam's new life. It's all changed. Life doesn't stand still for any of us. We move on. We grow. It's not a sad thing. It's joyous." (Korgen later stepped away from the reboot, according to a Feb. 25 Deadline report.)

So, there you have it: Seddie and Creddie will probably be addressed in the reboot, but likely only to acknowledge they've all moved on from their preteen days.

The iCarly reboot is currently in the works for Paramount+, but no premiere date has been announced yet.

More like this
This TikTok Theory About Eric From 'Boy Meets World' Will Blow Your Mind
By Rachel Varina
These Tweets About Regé-Jean Page Leaving 'Bridgerton' Are Royal Bummers
By Cianna Garrison
Netflix Renewed 'Bridgerton' For Seasons 3 & 4, Likely With More To Come
By Ani Bundel
Stay up to date