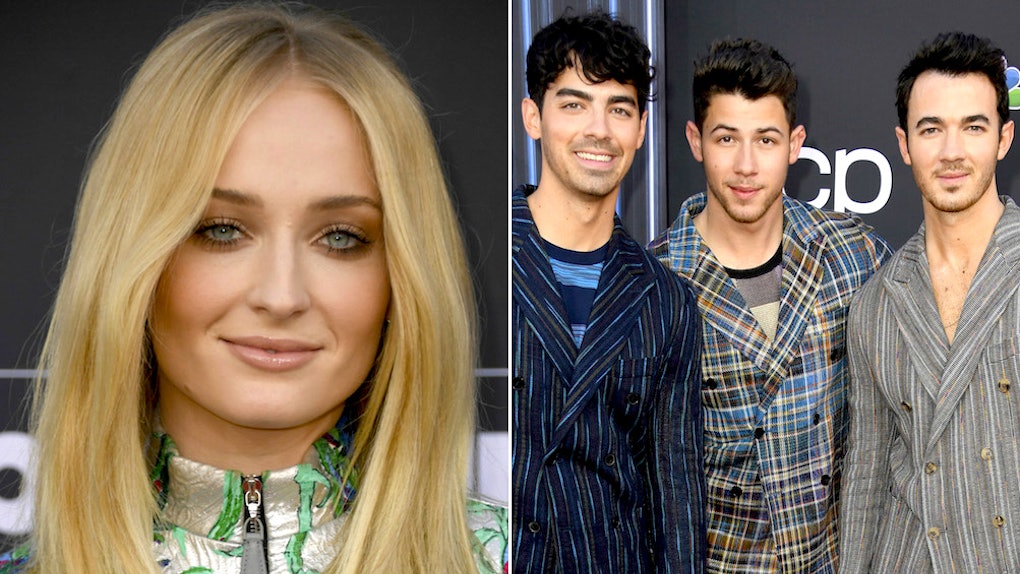 Will Sophie Turner Go On Tour With The Jonas Brothers? Here Are The Chances

Sophie Turner is a sucker for The Jonas Brothers. Well, maybe just one of them. Still counts! With every millennial's favorite trio of brothers making moves to embark on their Happiness Begins reunion tour in August 2019, and considering the fact that Turner and Joe Jonas have officially married thanks to their Vegas elopement, fans might be asking, "Will Sophie Turner go on tour with The Jonas Brothers?" The J sisters have been there to support their guys throughout their performances since reuniting, so it wouldn't be far off to think that she would.

The Game of Thrones star's schedule seemingly just opened up a bunch, now that the HBO staple show is closing up shop for good. (That pained me to type.) She's already done her press tour for the next installment of X-Men, Dark Phoenix, so unless she's already booked some other acting gigs that will take up her time this summer, it seems totally possible that she may join husband Joe Jonas and her brothers-in-law on the North American leg of the Happiness Begins tour, even if it is just for a few stops along the way.

Back in April, Turner, Priyanka Chopra, and Danielle Jonas accompanied Joe, Nick, and Kevin to a bar called Champs at Penn State University (my alma mater, what up) to perform "Cool" for the first time live. First of all, when I was at Penn State, that bar was a freaking Chili's. Second of all, the J Sisters being there for the performance (and Turner standing on the bar as the crowd chanted "Lady Stark! Lady Stark!") is a good sign the Jonai wives would def be able to manage the highs and lows of life on the road. Chances are, they won't spend all of the tour with them (they're working women! They're busy!), at the very least, it's safe to assume they'll be present for some of the performances.

The J Sisters were also in the audience at the Billboard Music Awards, where Joe, Nick, and Kevin performed, and they also accompanied the boys when they were the musical guests on Saturday Night Live on May 11.

Here are all three couples going through a manmade tunnel backstage at 30 Rock.

There's another element to this question that we should delve into. The Jonas Brothers have made their partners an integral part of their reunion. Turner, Chopra, and Jonas all co-starred in the "Sucker" music video (aka, the group's first single and video since reuniting as well as their first No. 1 hit on the Billboard Hot 100), they've been involved in the band's social media campaigns, and they've taken part in promoting their husbands' music on their own social media accounts. The J Sisters are just as beloved by the fans now as the Jonas Brothers are, so to not have the women be part of their tour in some capacity would definitely feel like a missed opportunity for the group's fans.

This whole Happiness Begins era has been marketed as the result of Nick, Joe, and Kevin mending their somewhat frayed bond, getting the band back together, and the resulting happiness that followed. But a huge part of that happiness, as made clear by the brothers' social media posts doting on their partners, has been their relationships with their wives. The three couples now seem like an inseparable group of best friends, traveling the world and sharing in experiences together. It only seems natural that the couples would all embark on this tour together, so I'm going to go ahead and make an educated guess that The Jonas Brothers will also be touring with The Jonas Sisters this summer, at least in part.

More like this
Is Taylor Swift's "Mr. Perfectly Fine" About Joe Jonas? Sophie Turner's Instagram Has Fans Curious
By Brandy Robidoux
The Best Movie Soundtracks Were So Good, They'll Live On Forever
By Brandy Robidoux
The 'Glee' Cast's Tribute To Naya Rivera At The 2021 GLAAD Media Awards Was So Moving
By Abby Monteil
Stay up to date