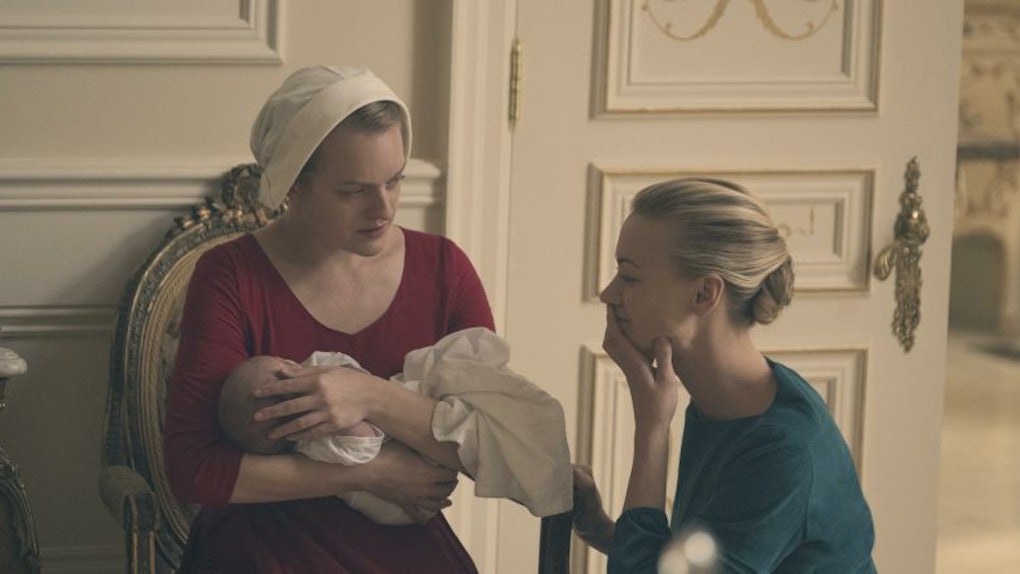 Will Serena & June Team Up In 'The Handmaid's Tale' Season 3? Theories Are Pouring In

The Handmaid's Tale spent all of Season 2 trying to figure out how to get Offred out of Gilead and into Canada. The Waterfords spent all seasons trying to make sure this didn't happen. The early episodes saw Offred on the underground railroad only to be thwarted last minute. Then, there was the time she got left in an abandoned house and the garage door wouldn't open for her to drive off. Now, she's stuck in Gilead another year. Will Serena and June team up in The Handmaid's Tale Season 3? Warning: Spoilers for The Handmaid's Tale's Season 2 finale follow.

To be clear, Offred didn't have to stick around in Gilead. She could have left. The door was open. The van was paid for by one of the highest-ranking officials in Gilead. She had Serena Joy's blessing to go and take her daughter to Canada and get out of Gilead. This was a non-stop, one-way drive straight to freedom.

Offred didn't take it. Instead, she gave her daughter over to Emily (who was getting in the van, thank you very much) and she turned around and went home. This ending has frustrated a lot of reviewers, by the way, who felt it smacked too much of "Season 3 requires it" rather than character choice. But what's done is done. The question is what comes next.

Showrunner Bruce Miller suggested the reason Offred couldn't leave was Hannah. She got one daughter out. She knows, from seeing her in Episode 10, that her other daughter has not forgotten her and wants to be rescued. And so Offred is going back to Gilead, to the Waterfords, to Nick, Rita, and Serena Joy. My best guess is she plans to take Commander Waterford up on his suggestion they could "try for a boy," and he could arrange for her to see Hannah a couple more times.

It also will keep everyone else in the household from hanging. There was a concerted effort for Offred's escape. Rita and Nick were both in on it, and Serena let Offred go when she realized what was happening. Offred's return will keep Nick and Rita from swinging, and maybe Serena Joy, too.

But what's her plan when she gets back? One of Offred's problems for the first two seasons was isolation. She didn't know who to trust outside the Waterford home, and those inside the house were either taken away from her (like Nick when the Waterfords married him to Eden) or rejected her (like Rita did at the beginning of the season).

But now, she has a potential ally in Serena Joy. Serena just received the wake-up call of all wake-up calls, when she attempted to adjust Gilead, a place she originally wrote the laws for, only to find herself dragged away and tortured. She's been returned to her position as Waterford's wife, but down a finger. It's a daily reminder the place she dreamed up is now a nightmare she can't escape.

Serena Joy could also start undermining Fred at every turn. She's a good writer. She could start producing anti-Gilead pamphlets with Offred's editing help. Add in Commander Lawrence, who seems to have started his own one-man-Mayday operation, and the three of them could start tearing down Gilead from within.

But will Serena Joy team up with Offred to retake Gilead back? Offred has trusted Serena too many times and been let down too often. Never forget, Serena Joy willingly held Offred down so Fred could rape her, a power move to remind her who was in charge. She flips on a dime.

When she sees Offred did not go with the baby, she could decide this wasn't the deal she agreed to at all. She could side with her husband to demand Canada return their child. Offred could be walking back into a trap she should have left. Viewers will have to wait for Season 3 to find out which way the cards fall.

This article was originally published on July 11, 2018