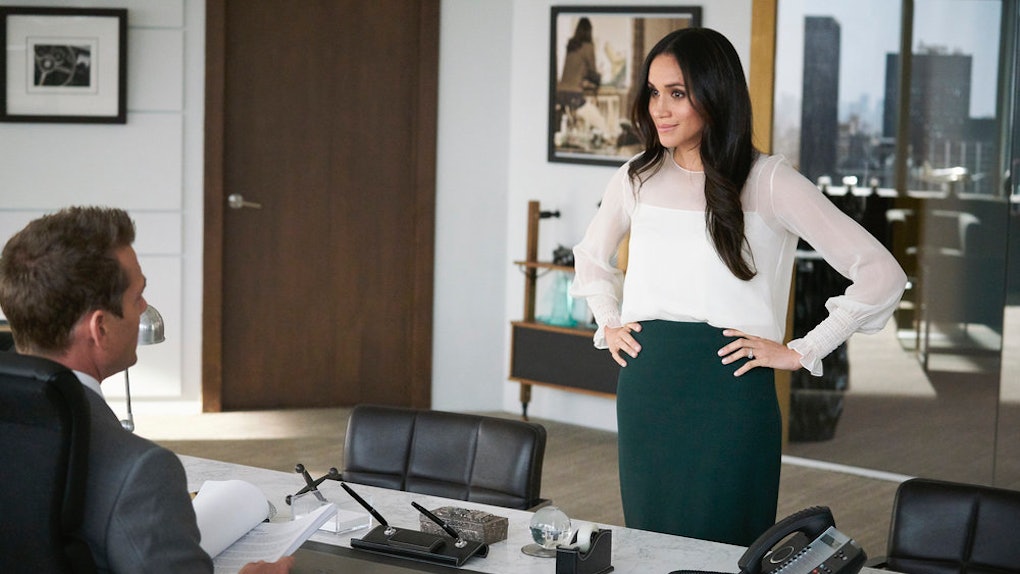 Will Meghan Markle Return To 'Suits'? The Show's Creator Has A Message For Fans

Less than a year after Meghan Markle's last episode of Suits aired, the USA Network has officially renewed the legal drama for a ninth and final season. Currently in the middle of its eighth season and the first without the new Duchess of Sussex and her former co-star Patrick J. Adams, Suits welcomed Katherine Heigl and promoted recurring stars Dulé Hill and Amanda Schull to fill the casting gaps. However, a show always lacks a little magic when its longtime stars leave, so will Meghan Markle return to Suits for Season 9? It's too early to tell, but there are rumors of what could persuade Markle to make one last cameo on the small screen.

Playing paralegal Rachel Zane for the show's first seven seasons, Markle departed the series ahead of her May 2018 marriage to Prince Harry, Duke of Sussex. After Rachel and Adams' Mike tied the knot in Season 7, the couple left New York City to open their own legal firm in Seattle. While their return is certainly feasible within the show's universe, the actors making farewell cameos on Suits is a little trickier to pull off. Adams recently welcomed his first child, while Markle essentially retired from acting when she officially joined England's royal family. She will also give birth to her and the Duke's first child this spring.

According to Entertainment Tonight, Markle was reportedly offered "millions in charitable donations" to appear in a Suits cameo. Series creator Aaron Korsh, who attended the royal wedding alongside several Suits actors, spoke to Deadline to debunk the speculation circulating Markle and Adams' potential return, saying:

As of this minute, I don’t know which of our old original cast will be back and which won’t because we’re so early in the season. I can tell you that those things in the papers [about donating toward Markle's appearance], I have no idea what they’re talking about. I have not arranged for millions of dollars to be donated to anything on behalf of anyone ... we’re so early in the season that we haven’t formulated what we want to do, so we can’t reach out to people before we know what we want to do.

Korsh also revealed that he and his team are considering Adams returning during the 10-episode ninth season, saying, "The final 10, you can’t contemplate it without contemplating bringing Mike back...we’ll see where we land, and how Patrick feels."

As for how Markle feels about returning, she's definitely voiced her peace with the decision to leave acting behind. In her November 2017 engagement interview with Prince Harry, she said:

I don't see it as giving anything up. I just see it as a change. It's a new chapter, right? And also, keep in mind, I've been working on [Suits] for seven years. We were very, very fortunate to have that sort of longevity on a series… I've ticked this box, and I feel very proud of the work I've done there, and now it's time to work with [Harry] as a team.

Since then, Markle has also hinted while greeting the public at events that she hasn't watched Suits' latest season. Of course, she has a busy schedule as a pregnant Duchess experiencing her first full year as a royal, so we don't blame her for failing to keep up with TV shows. Given the royal family's unease about Markle's old blogging platform, fans probably shouldn't count on her popping up in the spotlight on Suits again, but that's what reruns are for.