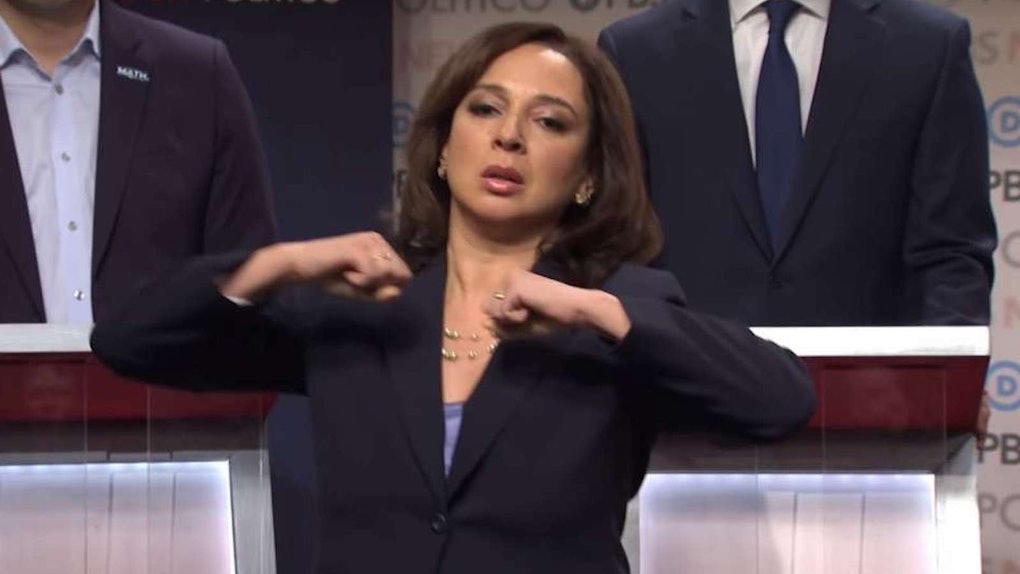 Will Maya Rudolph Return To 'SNL' As Kamala Harris? Here's Her Response

Joe Biden's pick for his running mate wasn't only a huge decision in the political world, it also had major ramifications in the realm of sketch comedy. Election years always make for memorable seasons of Saturday Night Live, and after Biden officially selected Senator Kamala Harris as his vice president nominee, every comedy fan had the same question: Will Maya Rudolph return to SNL as Kamala Harris? Luckily, Rudolph was speaking with Entertainment Weekly the moment Biden's announcement happened, and she gave her thoughts on potentially getting a lot more airtime in Season 46 of SNL.

On Tuesday, Aug. 11, Biden announced Harris as his running mate for the 2020 presidential election. Rudolph had appeared as Harris several times during SNL's 2019 season as the show covered the Democratic primaries, and the comedian confirmed she is totally down to portray Harris again in upcoming episodes. As luck would have it, Rudolph was filming an Emmys panel with Entertainment Weekly when the news broke, so she gave her reaction right away: "I'm as surprised as you are, guys. That's spicy." She went on to say she'd be happy to reprise her role for the show.

"I love going to the show. Any excuse I can get, I love," Rudolph said. "I just didn't really anticipate traveling during a pandemic, but if there's anyone that can work it out I'm sure Lorne [Michaels] has some sort of invisible helicopter that can get me there."

While it's too early for anything to be official, SNL did tweet out a gif of Rudolph as Harris after Biden made his announcement.

Rudolph earned an Emmy nomination for Outstanding Guest Actress in a Comedy Series for her portrayal of Harris in three 2019 SNL episodes. From the looks of things, she'll likely be a shoo-in for next year's awards show too.

It's still up in the air what Saturday Night Live's new season will look like, though. Last month, reports surfaced claiming the sketch series is preparing to return to Studio 8H in the fall after closing out its 45th season with a string of virtual, self-taped episodes amid the coronavirus pandemic. The new season of Saturday Night Live is expected to premiere in late September, right around the time the presidential and vice presidential debates are scheduled to begin. So get ready for Rudolph to deliver even more hilarious Harris moments, because it definitely sounds like fans will be seeing a lot more of her soon.

More like this
Joe Biden's Quotes About Kamala Harris Are Full Of Respect
By Rhyma Castillo
The 'Grey's Anatomy' Season 17, Episode 10 Promo Clip Reveals Lexie Grey's Return
By Cianna Garrison
When Will 'Riverdale' Season 5 Return In 2021? Its Mid-Season Break Is Long AF
By Rachel Varina
Stay up to date