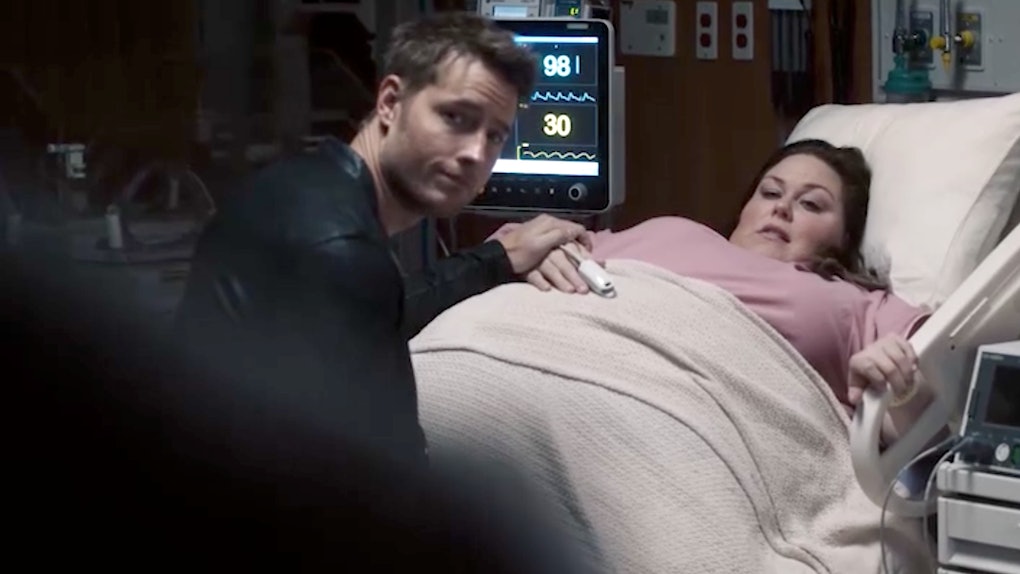 Will Kate Lose Her Pregnancy? 'This Is Us' Season 3 Took A Scary Twist

After a couple weeks away, This Is Us returned this week with some truly upsetting storylines. The new episode, entitled "The Graduates," was all about people who find themselves unwilling to move on and make a big change, but a shocking twist at the end of the episode forced Kate to confront a scary possibility. Spoiler alert: This post contains plot details from This Is Us Season 3 Episode 14. The final moments have fans worried that Kate will lose her pregnancy, and Kevin and Randall honestly are not doing too great either.

The new episode of This Is Us picked up right where we left off: Beth has decided to pursue her passion to become a dance teacher, and Kevin has secretly fallen off the wagon and started drinking again. Kevin's drinking has gotten so bad, in fact, that he is waking up upside down on hotel room couches surrounded by bottles, and compulsively lying to Zoe and Kate about fake meetings with Steven Soderbergh.

Deja's also having a rough go of things after her teacher published her essay about her time living in a car without her permission. And she only grew more upset when Randall told her that her teacher was recommending that she skip a grade. Deja opened up and revealed that she was happy to have found a stable routine for once in her life, and did not want that to change. But Beth's hectic new dance schedule got Randall worried that they could not keep up the routine much longer, leading him to ask Beth to put her dancing on hold yet again to be at home with the girls. Yeah, that did not go over well...

Thankfully, Kate was having a good time at her surprise graduation ceremony. Toby surprised Kate by (of course) going way over the top with a whole graduation party after she completed her community college course, the only problem was Kevin's erratic behavior. Kate eventually left the party to check on Kevin, and discovered all the alcohol bottles in his hotel room, and demanding that he start attending AA meetings again.

The common element that all the stories in this new episode shared was a reluctance to move on or change. Deja does not want to skip to high school, Randall does not want Beth to change their family routine, and Kevin once again reverted back to his alcohol dependency. The theme continues in the flashbacks: a young Kate refuses to attend her high school graduation in protest of Kevin's plans to move to New York, and Rebecca struggles to properly deal with her grief shortly after Jack's death.

The biggest moment of the episode, though, came at the end. While Kate is driving Kevin to an AA meeting, she worriedly says that she thinks her water broke. This is so scary because Kate is only 28 weeks pregnant, so if she gave birth now the baby would be extremely preterm and have a very low chance of surviving. Luckily, Kate gets to the hospital and the drugs appear to be working to stall the pregnancy, but her labor is still so early that things look pretty grim. At least the episode goes out on a final hopeful note, as the Big Three reunite in Kate's hospital room.

Next Tuesday's episode is entitled "The Waiting Room," so you can bet that Kate's premature labor will be at the center of the next new episode.