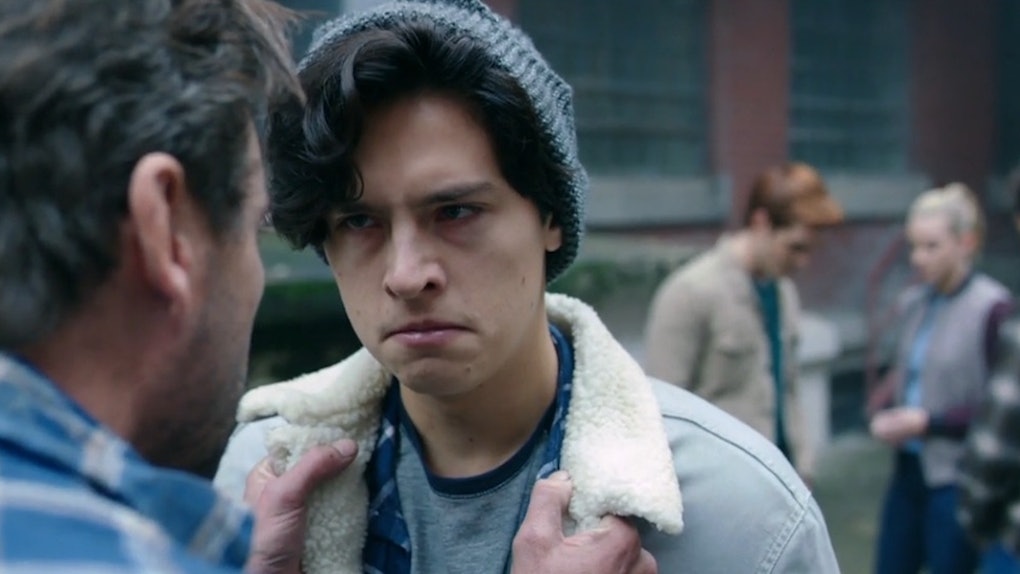 Will Jughead Die In The 'Riverdale' Season 2 Finale? New Spoilers Are Scaring Fans

After killing off a handful of supporting characters throughout its second season, Riverdale might actually pull the trigger on a main player in the upcoming season finale. Yes, I'm talking about Jughead, the de facto narrator and self-professed "weirdo" of the teen drama. As hard as it may be to believe, Riverdale fans have been putting together a ton of clues suggesting that Jughead may be killed off in the Season 2 finale. So, will Jughead die in the Riverdale Season 2 finale? Let's go over all the clues pointing to this shocking twist.

The main thrust of Jughead Jones' story in Season 2 of Riverdale has been his devotion to the Southside Serpents. In the finale of Season 1, Jughead officially joined the biker gang, seemingly drawing a line in the sand between himself and his friends at Riverdale High. The new season has further proven Jughead's unshakable commitment to the Serpents, which often placed him in direct opposition to former bestie Archie and newly arrived mafia bigwig Hiram Lodge. Heading into the Season 2 finale (which will air on May 16), tension between the Serpents and the Lodges is at an all-time high, after the most recent episode ended with [spoiler alert!] Fangs getting shot in the stomach at Hiram's urging. It sure looks like the intense rivalry between Jughead and Hiram will finally come to a head in the finale, and that is what is causing fans to worry about Jughead's fate so much!

Last month, the Riverdale cast teased what fans can expect from the finale, and it does not sound great for Jughead. Cole Sprouse ominously warned, "Jughead's made a lot of enemies," and KJ Apa confirmed that the final episode will be tragic "for one person in particular in the show." Marisol Nichols' hint also lends itself to Jughead worry, confirming that a big gang war is at the center of the finale.

Showrunner Roberto Aguirre-Sacasa isn't helping worried Jughead fans. He tweeted that the penultimate Season 2 episode will be "literally heart-stopping" for one of the characters, accompanying the message with a picture of Jughead.

A Riverdale fan is also claiming to have gotten some finale scoop from Skeet Ulrich, who plays Jughead's dad FP Jones on the series. The post, which has been shared on Reddit recently, claims that Ulrich said his favorite scene between FP and Jughead is coming up in the season finale, and that Jughead is lying in a hospital bed during that scene.

So, what could happen to leave Jughead in peril at the end of the season? The clearest answer comes from a small line in the latest episode — Season 2, Episode 20, "Shadow of a Doubt." Towards the start of the episode, Jughead gathers the Serpents around and reveals that their rival gang the Ghoulies are on the loose and looking to spill some Serpent blood. It sounds like a huge gang war between the Ghoulies and the Serpents is on the horizon, probably resulting in a life-threatening injury to Jughead.

Then again, Jughead has no shortage of enemies. Along with the Ghoulies, Hiram Lodge has also made his hatred of Jughead well known, and we have seen that the mafia boss is not above killing anyone who stands opposed to him. And of course, there's also that pesky Black Hood, whose killing spree has redoubled in the last few episodes.

With a ton of threats to his life, Jughead definitely does not seem to be in an ideal position right now, but let's not forget that he's also a major part of Riverdale's main cast — would they really kill one of the Core Four? It seems more likely to me that Jughead may come close to dying, but manage to survive into Season 3. Or... if someone does die, it might actually be FP Jones, who could sacrifice himself to save his son in the middle of the gang war. One thing is for sure: something really scary is about to happen to the Jones boys.