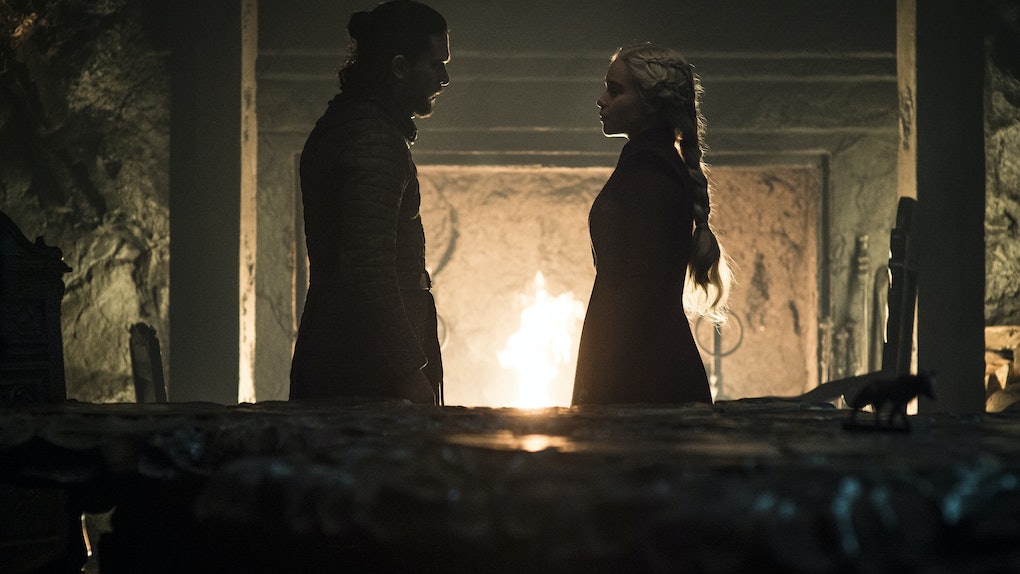 Will Jon Betray Daenerys In The 'Game Of Thrones' Finale? It's Not Looking Good For Her

Game of Thrones Season 8 staged the Battle of King's Landing to be a horror show. The Battle of Winterfell, which aired only a few weeks before, was the battle between good and evil. There was no question about which side was right and which were wrong. The Battle of King's Landing confused all of that, taking those who had been the protagonists and having them go buck wild in war, murdering their enemies indiscriminately. But one character seemed to understand how horrifying this all was: Jon Snow. Will Jon betray Daenerys in the Game Of Thrones finale?

The series seems to be setting up for it. One of the choices Jon has been making, ever since the battle of Winterfell is to submit to Daenerys' desires. It's actually a fascinating mirror image of how Ned once worked so hard to please Catelyn out of guilt over keeping Jon's parentage a secret from her, letting her believe he was unfaithful. Ned did what Catelyn wanted out of self-condemnation over a lie. Jon is doing the same for Daenerys over guilt about the truth.

That need to prove himself loyal at every turn is how Jon found himself standing on the streets of King's Landing, watching in horror as the Unsullied and Northern forces tore into their own bloodlust on a people who had already surrendered and Daenerys slowly and methodically firebombed the city.

As Jon stood in the street, he registered the complete breakdown of the nominally accept "protagonists" he allied himself with. After all the warnings from Sansa and Arya, and Varys' nudging, it had to feel like the worst sensation ever. Jon had picked his side of the fight. He'd fallen in love with Daenerys, and he'd stood by her side while everyone else told him to think about the wisdom of this choice.

And in the end, he realized he'd chosen wrong.

Jon is now trapped between an emotional rock and an honorable hard place. He loves Daenerys, but what she just did was beyond the pale, a complete repudiation of all her claims of doing this to "free the residents of Westeros" from tyrants. Everything Ned Stark taught him about honor and leadership tells him this is wrong.

Worse, he now has an entirely different load of guilt that he's carrying, that he didn't listen to Sansa and Arya. When his sisters asked to side with his family, and listen to the smartest ones in the room, he assumed he knew better. They were right, and he was wrong. Knowing Jon Snow, he'll blame himself for allowing this to happen. Moreover, he'll need to set it right.

Going into the finale, the question is how exactly Jon does that. The easiest choice is to allow the elites of Westeros to use him as a pawn against Daenerys. Stop fighting those who would crown him Aegon IV Targaryen, Lord of the Seven Kingdoms. It would be the ultimate betrayal of Daenerys, but it would get the job done.