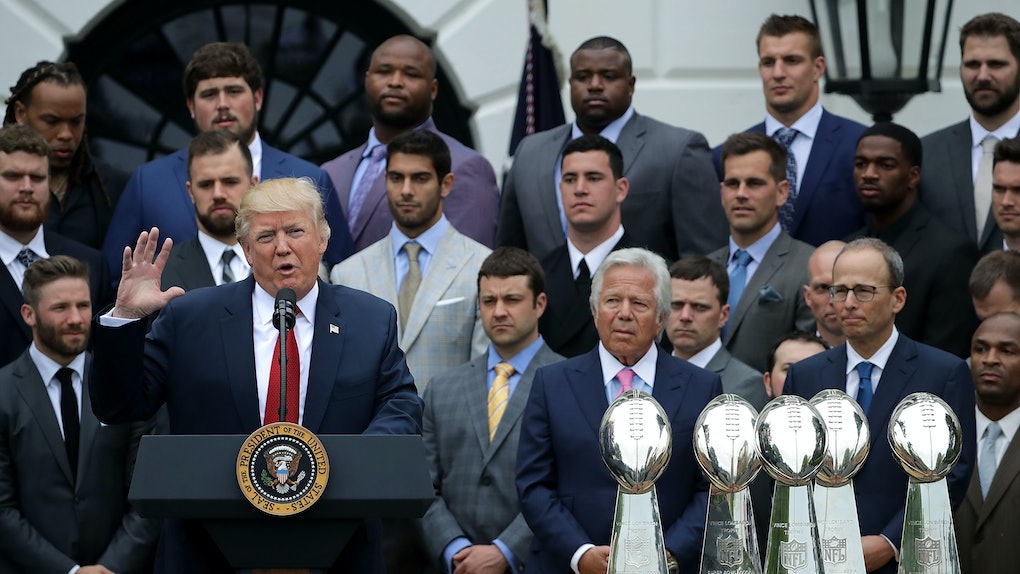 Will Donald Trump Do A Super Bowl 2019 Interview? Get Your Popcorn Ready

The 53rd annual Super Bowl is less than a week away, and while Americans are getting their chip bowls and coolers lined up for the big day, President Donald Trump is also prepping for this Sunday. Though he sat out the traditional pre-game chat last year, Trump is doing a Super Bowl interview this year, according to Variety. The pre-taped interview will air on Sunday, Feb. 3 at 3:30 p.m. ET on CBS' Face the Nation.

Super Bowl LIII will officially kick off some three hours later at 6:30 p.m. ET in Atlanta's Mercedes-Benz stadium, where the New England Patriots will face off against the Los Angeles Rams. Variety reported on Jan. 28 that CBS' Margaret Brennan will interview Trump, and a portion of the exchange will shown ahead of the game. Trump has yet to sit for a live interview, which his predecessor used to do.

CBS Sports Chairman Sean McManus had previously said the network was in talks with White House as to whether the president would do an interview this year, according to The Washington Post, but as of January 10, there was no confirmation one way or another.

In 2017, for Super Bowl LI, the newly-inaugurated president's prerecorded interview with Fox News aired ahead of the game. Last year, Trump declined to do an interview for NBC when it hosted the 2018 event.

In the last week, Trump has been talking about Sunday's big event, voicing his support for the players — well, some of them, at least.

"Congratulations to Bob Kraft, Bill Belichick, Tom Brady and the entire New England Patriots team on a great game and season," the president tweeted on Jan. 20. "Will be a fantastic Super Bowl!" Trump hasn't appeared to make any similar statement of congratulations to the Rams, according to a digital archive of the president's twitter feed as of publication.

Trump also hasn't always been the biggest of fans when it comes to the Super Bowl specifically, saying in tweets from previous years that it was "very boring."

The tradition of sitting for interviews with the hosting network began with President George W. Bush in 2001, per the Post, and was carried on by President Barack Obama, who participated in the interviews in each of his eight years in office.

Though it's not clear what the topics of conversation will be, there will be plenty for Trump and Brennan to discuss in their interview. While politics is often not what viewers want to listen to ahead of a sporting event like this, Variety says, there's a lot going on in Washington these days. On Friday, Trump's longtime adviser Roger Stone was indicted on charges including false statements to Congress, and the FBI investigation being led by Special Counsel Robert Mueller is said to be wrapping up. Stone has pleaded not guilty and said he is innocent of all the charges. Meanwhile, the government shutdown is still barely in the rearview mirror for many Americans, and the federal government is not out of the woods yet, with just over two weeks to negotiate another plan to fund large swaths of government before a second shutdown could become a reality.

Specific to football, there's a lot of fodder there, too. Though he's been relatively quiet about it recently, Trump had an ongoing feud with the NFL, over players who knelt during the national anthem to protest police brutality against people of color. The president is also a long-time friend of Tom Brady, the Patriots quarterback who will be playing in his ninth Super Bowl on Sunday — a relationship that has caused some pushback.

While it's been confirmed that Trump will sit for the pre-game interview, it's not clear what his plans for watching the game itself will be. In 2018, he threw a party at his Mar-a-Lago resort in Palm Beach, Florida. As of Jan. 27, The Palm Beach Post didn't have any word on whether Air Force One is expected to land in town with the first family in tow for the big game, but should know later this week if the prez will be at the resort throwing another big Super Bowl party. One way or another, though, viewers will see their president on TV ahead of kickoff.