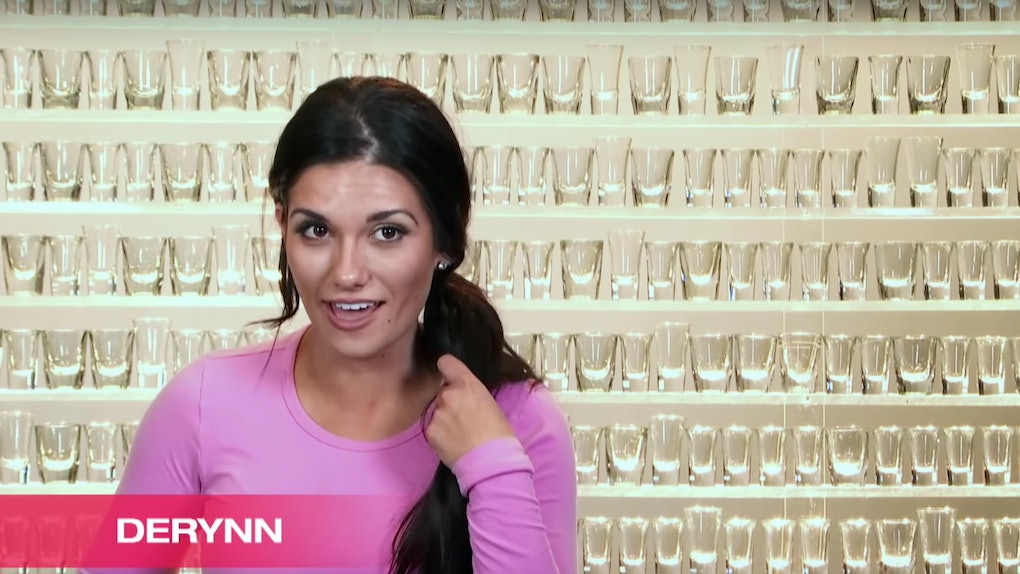 Will Derynn Win 'A Double Shot At Love'? Here's Why Fans Are Rooting For Her

We are only one week away from finding out who will win the hearts of DJ Pauly D and Vinny, and now that there are only four women left in the competition, it is closer than ever. Heading into the season finale, both Pauly and Vinny have two women each that they need to choose between, and one of the most surprising dark horses to make it to the final decision is Derynn, who did not make a great first impression when she first entered the house, but has since developed a strong connection with Pauly. So, will Derynn win Double Shot at Love with DJ Pauly D and Vinny, or is the competition just too strong? Let's go over Derynn's odds.

Honestly, it did not even seem like Derynn would make it past the season premiere of Double Shot at Love with DJ Pauly D and Vinny given the really bad impression that she made on day one. Right after entering the house, Derynn proceeded to get drunk with her fellow housemates and go on and on about her extreme love for cats. The cat obsession became so big that Derynn began crawling on the floor and purring while talking to plants and surprising Pauly D with a towel for some reason. The antics only got stranger during Pauly's first challenge: a talent show. Derynn's talent of telling incomprehensible jokes and showing off her baby voice creeped out Pauly and the other women of the house.

But after her rough introduction, Derynn actually grew to become one of the closest contestants in the house to Pauly D. Although her obsession with cats is still as strong as ever, she has refrained from crawling on the ground since that first night, and now several weeks into the series, Derynn definitely seems like a really cool and fun personality. So it is no wonder why Pauly has kept her around for so long.

Now, Derynn is heading into the season finale as one of the four girls left in the competition. She really does not have to worry about Alysse or Elle, though, since those two woman are competing for Vinny's heart. Derynn's biggest competition for the finale, as it has been all series long, is with Nikki. Pauly D's connection with Nikki is undeniable, as the two had immediate chemistry from day one and have only gotten closer in each episode of the show.

But despite that strong bond with Nikki, Derynn still has a chance to win Pauly D's heart. In recent episodes, Pauly has expressed that he is uncomfortable with how surprisingly committed that Nikki has become to him in such a short amount of time. During a lie detector test, she even admitted that she loves Pauly and would say yes if he asked her to marry him. That is pretty intense for someone that you just met a couple weeks ago.

Fans will get to find out whether Pauly D picks Derynn or Nikki when the season finale of Double Shot at Love with DJ Pauly D and Vinny airs on Thursday, June 27.