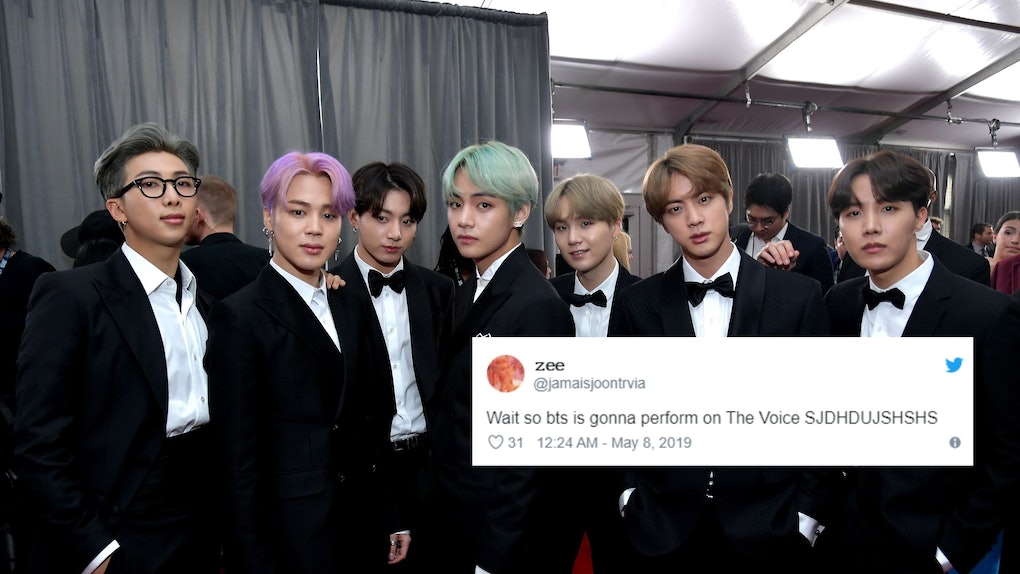 Will BTS Perform On 'The Voice'? The ARMY Is Convinced It's Happening For A Few Reasons

BTS has truly been taking over American TV with performances on shows like America's Got Talent, Good Morning America, The Ellen DeGeneres Show, Jimmy Kimmel Live!, and Saturday Night Live to name a few (and I do mean a few, because those guys have been everywhere lately). Now that the group is in America again for their Love Yourself: Speak Yourself tour, they are confirmed for even more stateside television appearances, including Good Morning America (again) and The Late Show With Stephen Colbert. But, fans are wondering if BTS will be performing on another television program: NBC's The Voice. I know, I know, that's huge. So, will BTS perform on The Voice? Fans are totally convinced they will.

OK, so where do I begin? Well, it all started on May 7, when BTS and John Legend posted a few pics together. If you didn't know, John Legend is a coach on the singing competition this season, along with Adam Levine, Blake Shelton, and Kelly Clarkson (who BTS also just saw at the this year's Billboard Music Awards — another NBC program, get what I'm saying?). Maybe you're thinking that it could have just been an innocent meetup between BTS and John Legend, but the two artists met on none other than the NBC Universal Studios Lot, where The Voice films its episodes. Nice job at keeping it on the down low, guys.

Naturally, the meetup had fans thinking that BTS would perform on the show, but they weren't sure when.

Then it hit them: The Voice's finale is on May 21. It would be the show's biggest episode of the season, so it would totally make sense to have the group on the show then. Since the guys would be off on their Love Yourself: Speak Yourself tour at that time, fans thought the performance could be pre-recorded, which is why BTS was filming their performance while they were still in Los Angeles. ARMYs are geniuses, guys.

Some people who attended the filming for The Voice the day BTS visited the Universal Lot said it was all true — that the group pre-recorded their performance for the show's finale and fans supposedly had the receipts to prove it.

OK, they do say don't believe everything you read online, but The Voice dropped a promotional video on May 13 saying that BTS has a "special announcement" to make on the show's episode the next night — the episode exactly one week before the show's finale. Wow, not suspicious at all. To top it off, the promotional video was, well, promoting the finale. I really don't know how much more obvious it can get.

Of course, the news won't be confirmed until the May 14 episode airs, but if it turns out to be true, the ARMY will just have to end up acting surprised since they've been suspecting it since last week.

The Voice airs Wednesday nights on NBC at 9 p.m, so I guess, stay tuned for BTS' "special announcement" on the show, because I clearly can't guess what it will be.